The EuroVelo 8 in our area is transitioning from a largely on-road signed cycle route to a quality cycleway that follows the route of the Train des Pignes railway. Here we offer tips on negotiating the changing infrastructure, where to stay, eat, repair your bike and more. 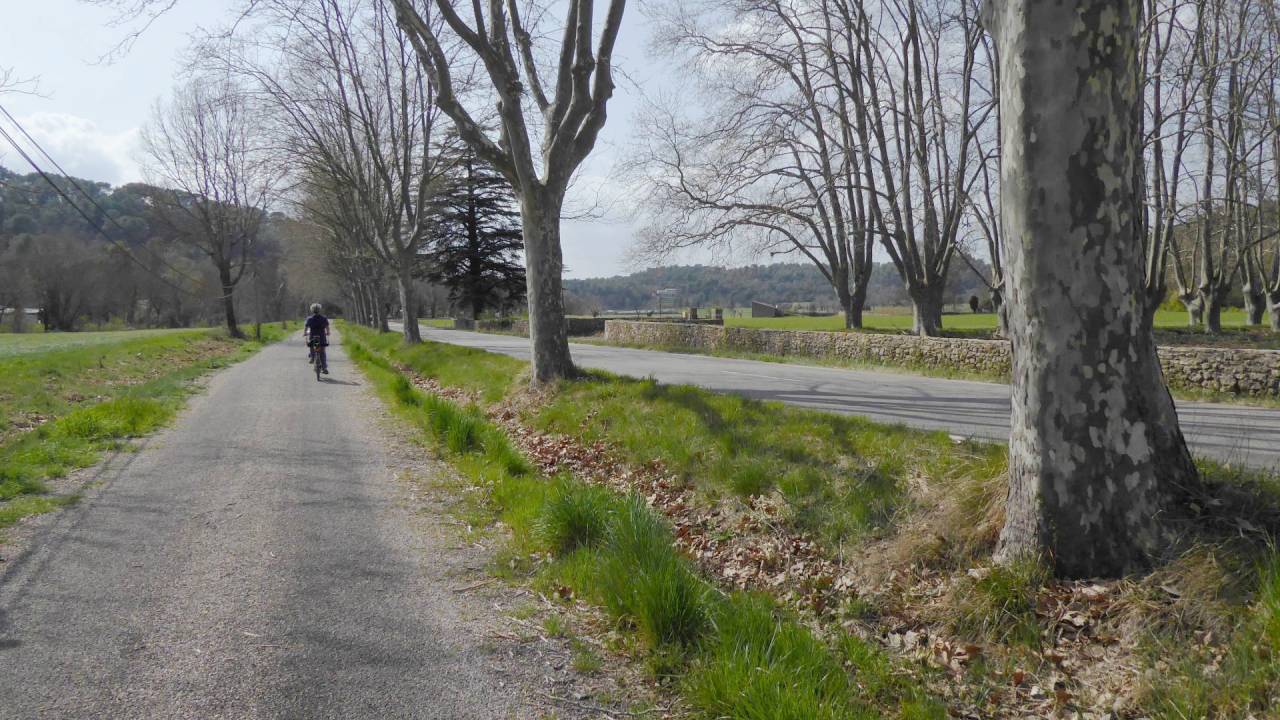 The EV8 near Pontevès has already been surfaced, but is not yet officially open

As many cyclists know, local knowledge helps to get you through poor infrastructure, long diversions or busy roads.

Getting in and out of nearby villages and shops is made a lot easier if you know the little lanes and tracks used by local cyclists. Then there are the things that make your ride more enjoyable. Tips on bike-friendly accommodation, where to eat good food without requiring a major diversion, where to get your bike repaired or your e-bike charged.

Our idea is simple. We live 700 metres from the EuroVelo 8. We’ve been cycling along nearby stretches for years. Given the provisional state of EV8 here in la Provence verte, we’d like to pass on what we’ve learnt. Apps like komoot and ridewithgps can help, but are limited. We want to dig deeper, and pass on information to both visitors and local residents trying out the cycleway for the first time. We want to concentrate – for now – on the 120 kilometres or so that we know fairly well. Perhaps the idea will catch on, and local users on other stretches will follow!

Work being carried out on the first gravel layer on the EV8 between Barjols and Sillans-la-Cascade, July 2020

Where Help is Needed

There are four problems with the EV8 in our region at the moment:

To help cyclists understand the state of the EV8 in our area, we have divided it up into 9 stretches. These nine stretches can be categorised as:

As these 9 stretches get developed, we’ll aim to keep up with the changes.

We are Slow Cyclists!

Our standards do not necessarily match those of other cyclists. Our philosophy of slow cycling might not be so relevant to the fit and sporty cyclist. But then these are cyclists who are happy to use most roads and mix with any amount of motor traffic anyway. Our aim is to be as inclusive as possible, making the joy of cycling available to the youngest child and the oldest pensioner.

Developing the EV8 is a great step forward. But it is being carried out in areas that have long prioritised motor traffic. And the geographical possibilities are limited not by geography but by political and financial priorities. One day, the EV8 will be a continuous and safe cycleway that anyone can use. Meanwhile, we’ll try to help you through our area with these little tips.

Sports cyclists continue to use the main road, as a parent accompanies his children on the EV8.

FR
We use cookies on our website to give you the most relevant experience by remembering your preferences and repeat visits. By clicking “Accept All”, you consent to the use of ALL the cookies. However, you may visit "Cookie Settings" to provide a controlled consent.
Cookie SettingsAccept All
Manage consent