It is a major challenge to find a relatively quiet cycle route into and out of Draguignan. We’ve looked at the alternatives. Here is our preferred option.

Draguignan lies at the bottom of a geographical bowl. Surrounded by steep hills, any means of accessing the town by bicycle is going to be challenge.

It also means that, whilst there are quiet road alternatives to the main route, these often end before crossing one of the several hills or ravines that dominate the area.

There are two further problems facing the designers of the EV8 on this stretch. First, the old railway line, which would have made the descent into Draguignan (and the return ascent) substantially less steep, has partly been taken by the D557, the main road from Flayosc to Draguignan. Second, the river Nartuby must be crossed. There are three bridges to the south of the D557, but to access them requires considerable cycling along the D557 itself. That leaves one bridge to the north, the Pont d’Aups. Getting to this bridge is the challenge. However, this is also where the old railway line crossed the river. We decided to follow the less steep Avenue du Col de l’Ange, the route of the old railway.

We travelled along both the “official” signed route, and a route which we found was considerably better. Our route actually appeared briefly on the francevelotourisme website, but was quickly replaced by the longer – and much steeper – official route. Perhaps the 100 metres of footpath our route requires bars this from being “officially” recognised. But we believe it to be much more practical, and indeed shorter, than the official route.

The core of this route is not signed. So here we give details for both directions.

Starting from the end of the Lorgues-Flayosc section of EV8, continue to the large roundabout. On the opposite side is the local wine cooperative cave. Take the first right on to the busy D557.

There is a quasi-cycle lane for the first 100 metres, but this rapidly peters out. After 500 metres, at the crossroads, turn left on to the quieter D57 (signposted le Flayoscquet). After 250 metres, turn right on to the Chemin des Grandes Pièces. Continue for a kilometre – this is your main climb – until you come to a t-junction. There is a fire hydrant on an S-bend just before the junction. The road continues to the right, but there is a track on the left. It is easy to miss, but there is an electricity box and a letter box with a lizard on the corner.

Turn left here, and 100 metres further on, partially hidden by trees and bushes, there is a small footpath on your right. At the entrance is a sign Protection Voisins Vigilants. Take this – you will probably have to push your bike. After 100 metres you come out on a cyclable path. Turn slight right on to a track called Saint-Joseph. Continue for 100 metres to a small crossroads. Keep going straight on, first along a dirt track (Route de Flayosc). You soon join a tarmac road.  Continue to the nearby crossroads and go straight over on to the Impasse du Baguier.  Another 80 metres and the road ahead narrows. This is the Chemin du Baguier. Now you descend sharply towards the D557.

Be very careful at this junction. You need to turn left and take the 50 metres or so to the hairpin bend, where you take a left on to the Avenue du Col de l’Ange. There is a gravel parking area to help you get across this dodgy stretch of main road.

Once on the Avenue du Col de l’Ange, there is a gentle, 1.6 kilometre descent to the Pont d’Aups. When you reach the bridge, turn right and cross the river Nartuby. After the bridge, there is a protected cycleway, which unfortunately you have to leave after 400 metres, at the next roundabout. Here the signed route leads you straight on the Avenue du Pont d’Aups, straight over the main D955 road, along Avenue Alphonse Daudet, past the Piscine Alex Jany on your right. Cross the roundabout to Rue Jean Aicard, and continue until you come to a T junction and Boulevard Maréchal Foch, where you turn right. You are now cycling on busy town centre streets!

Turn left at the first roundabout on to Boulevard Georges Clemenceau. Here you will encounter some token cycling infrastructure – sharrow markings on the roadway. Continue for about 300 metres until you come to the Office du Tourisme. Here you can either turn right to reach the bus station (previously the railway station) and the (much better) cycle route to les Arcs, or continue straight on for the EV8 beyond Draguignan.

If you are starting from Draguignan, follow the signed route all the way from the centre to the narrow bridge over the river Nartuby. On the far side the signed route continues on ahead, but you want to turn left on to the Avenue du Col de l’Ange. Now cycle up this road. This was the old railway line, so the gradient is very gentle all the way to the top.

When you reach the top, you join the main D557 road at a hairpin bend. Keep to the right for 50 metres or so until you come to the Chemin du Baguier. Turn sharp right here. The next 300 metres is your steepest climb, but this is quickly followed by a pleasant downhill glide. Follow the road all the way to where it opens out on to the wider Impasse du Baguier. Continue straight on for 80 metres to a crossroads. Keep to the left at the crossroads, but 30 metres further on take the dirt track that forks to the right. Follow this to the end, where you go straight over a small crossroads on to a track called Saint-Joseph. You want to take the track that bends left between the Protection Voisins Vigilants sign and the high wall in front of you. As you come to some large trees the track turns right. But there is also a footpath straight ahead. Take this. You will probably need to push your bike. After 100 metres you come out on a cyclable path. Turn left and ride down the hill for 100 metres. You come to a t-junction. On your right is an orange postbox with a painted lizard. Turn right here on to Chemin des Grandes Pièces. Follow this all the way to the end where you turn left on to the D57, then right  on to the D557. After 500 metres you arrive at the Flayosc roundabout where the EV8 to Lorgues begins.

This route is about 8 kilometres long, as opposed to the 10 kilometres using the official signed route. The average gradient is 0.9%, with a maximum gradient of 8.8%.

Creating attractive cycling infrastructure in and around  Draguignan is one of the greatest challenges for the managers of EV8 in Provence. It may be some time before a quality solution is developed. But meanwhile we can recommend our alternative, which gets you in and out of the town on mostly quiet back roads, without the sportsman-like effort required to negotiate the official route. 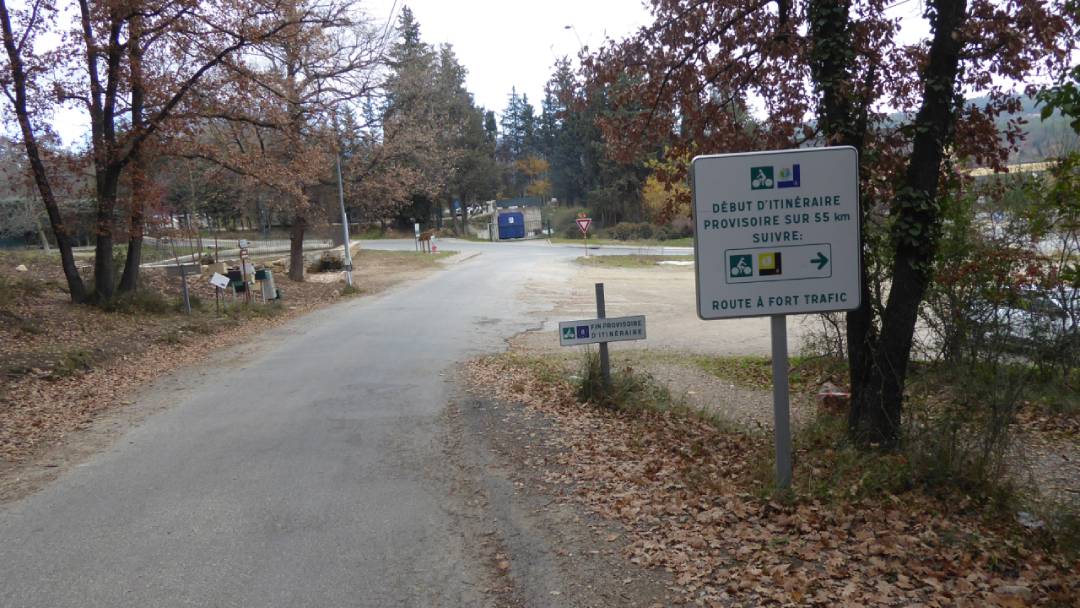 End of completed section of EuroVelo 8.

Coming from the west, this is the end of the dedicated cycleway at Flayosc. Turn right on to the large roundabout and follow the D557 towards Draguignan. 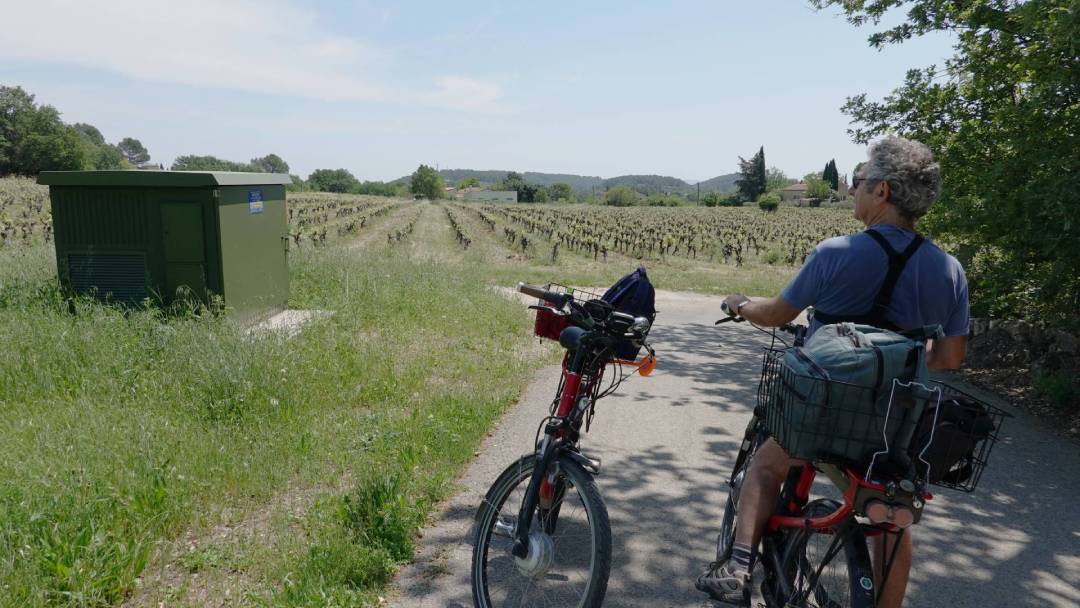 Coming from the west you’ll see this large electricity box on your left. This is where you should turn left. 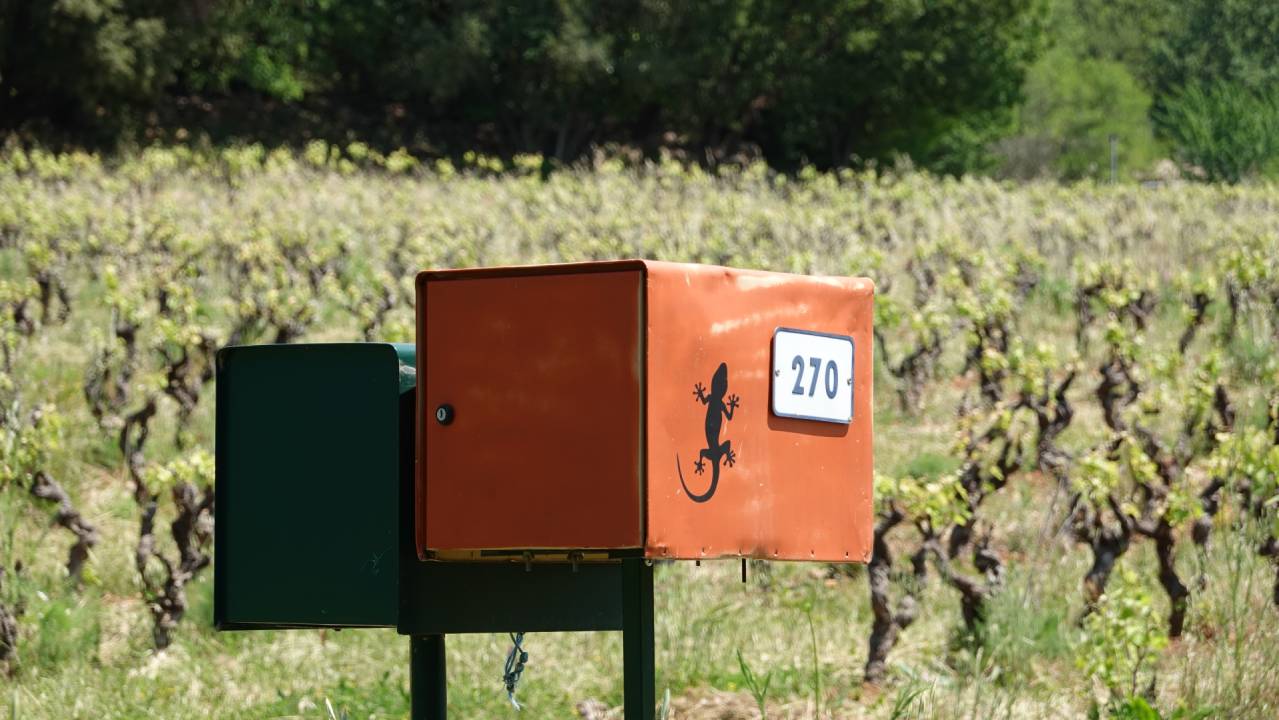 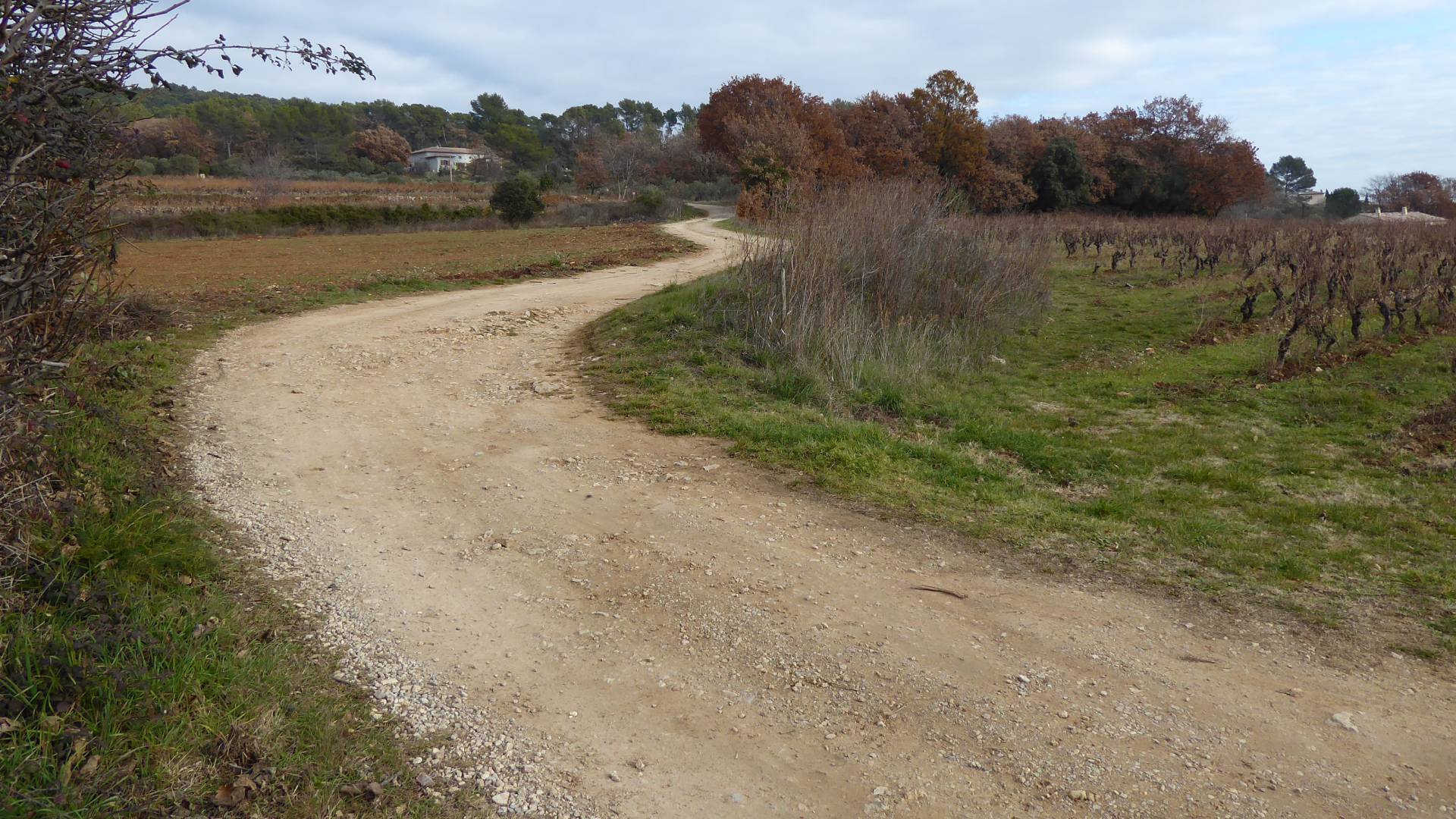 The track at the end of Chemin des Grands Pièces.

This takes you up a short climb to the footpath through a small wood. The key footpath is on the right, at the top of the field of vines. 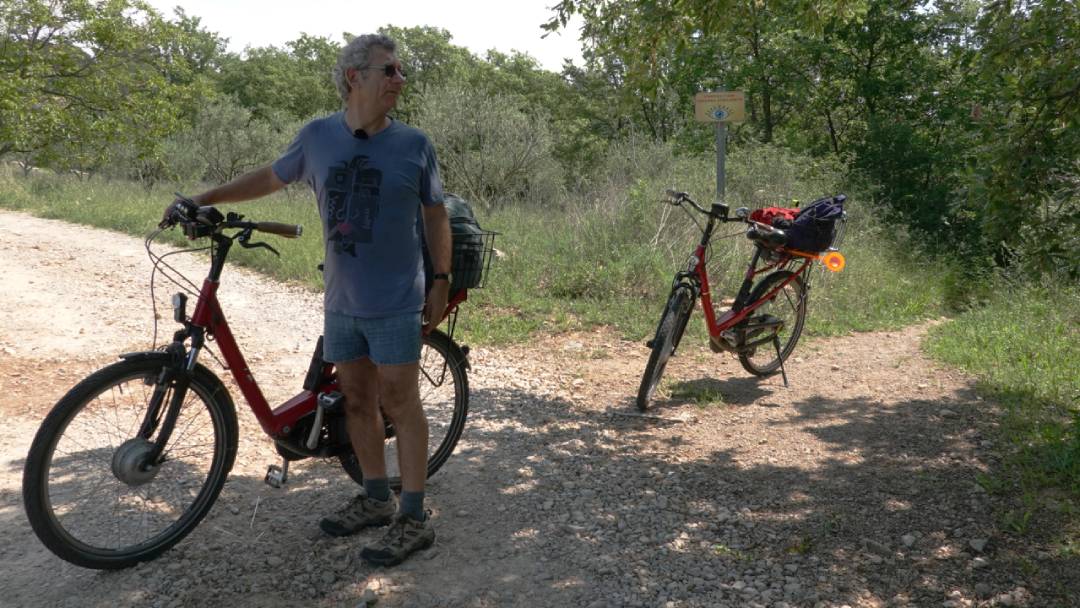 You can’t miss the Protection Voisins Vigilants sign on your right. Here is the short footpath. 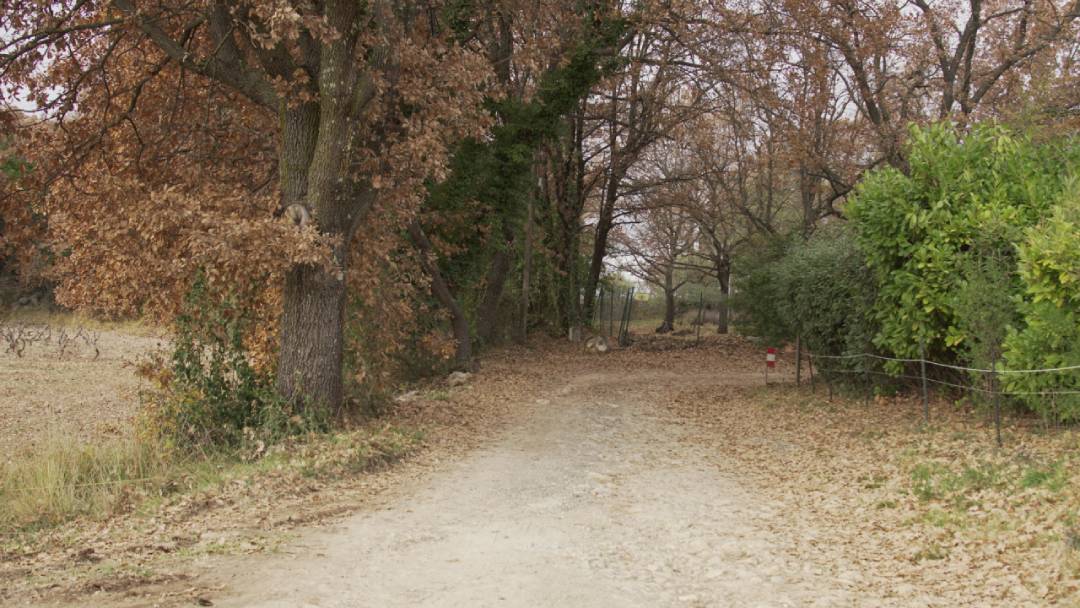 The track bends to the right but you continue straight ahead on to the footpath through the small wood. 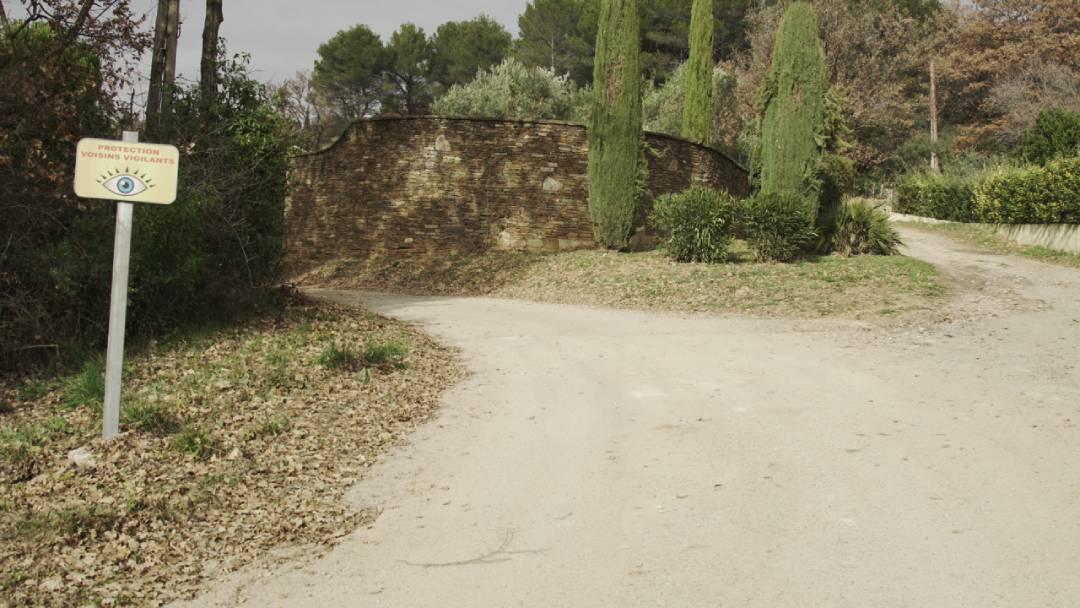 It’s easy to miss the track you need to take to get to the footpath. You need to cycle between the Protection Voisins Vigilants sign and the high wall. 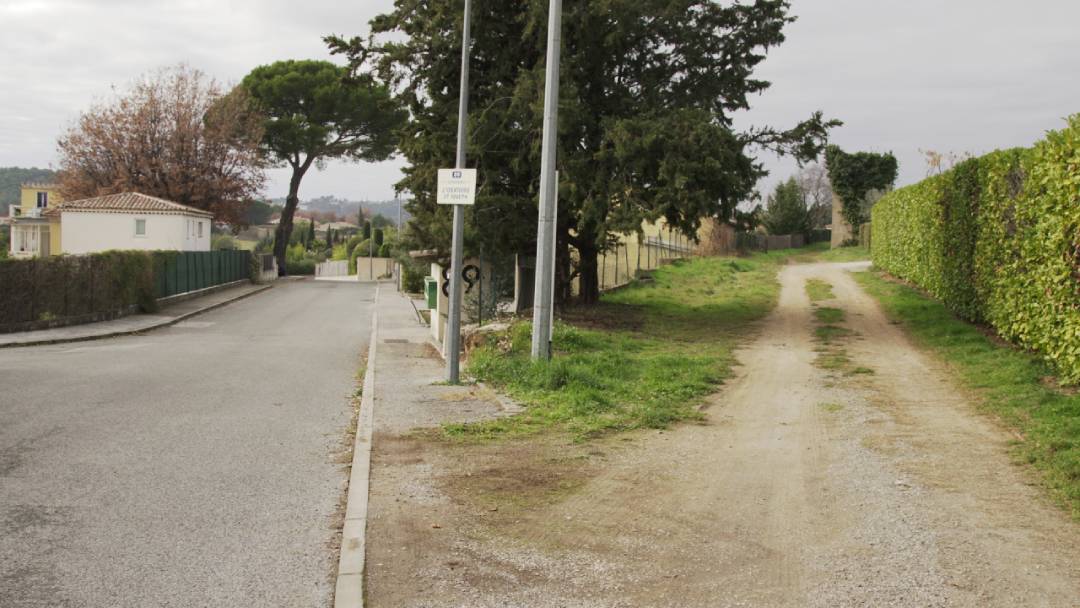 Another track you might miss. Coming from Draguignan, after travelling along the Chemin du Baguier, you need to use the track to the right of this picture. 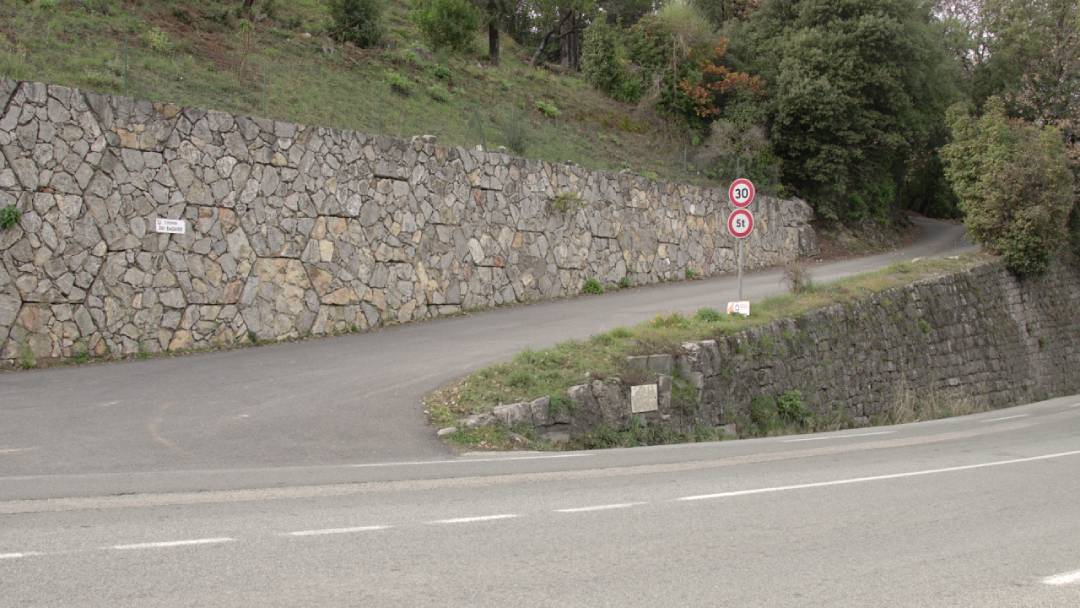 This is where you need to negotiate the busy D557 between Chemin du Baguier and the Avenue du Col de l’Ange. 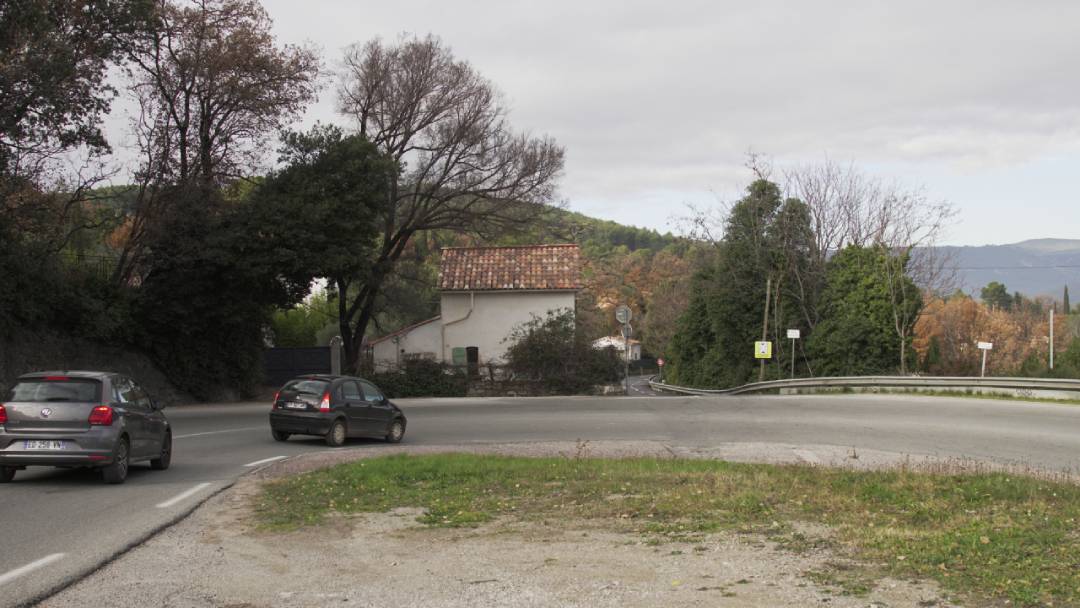 Here is the top end, where it connects with the D557 on a hairpin bend. 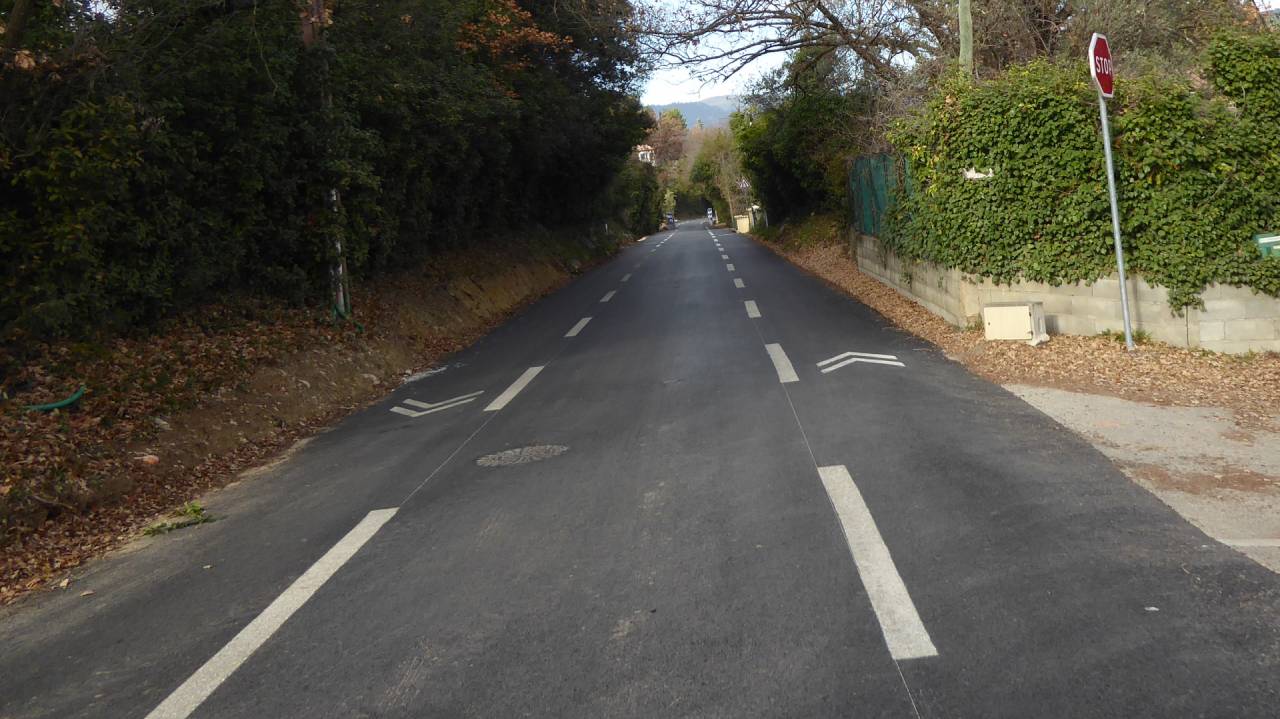 The road follows the route of the old railway line. As a result it is a gentle climb/descent between the Col de l’Ange and the bridge over the river Nartuby. 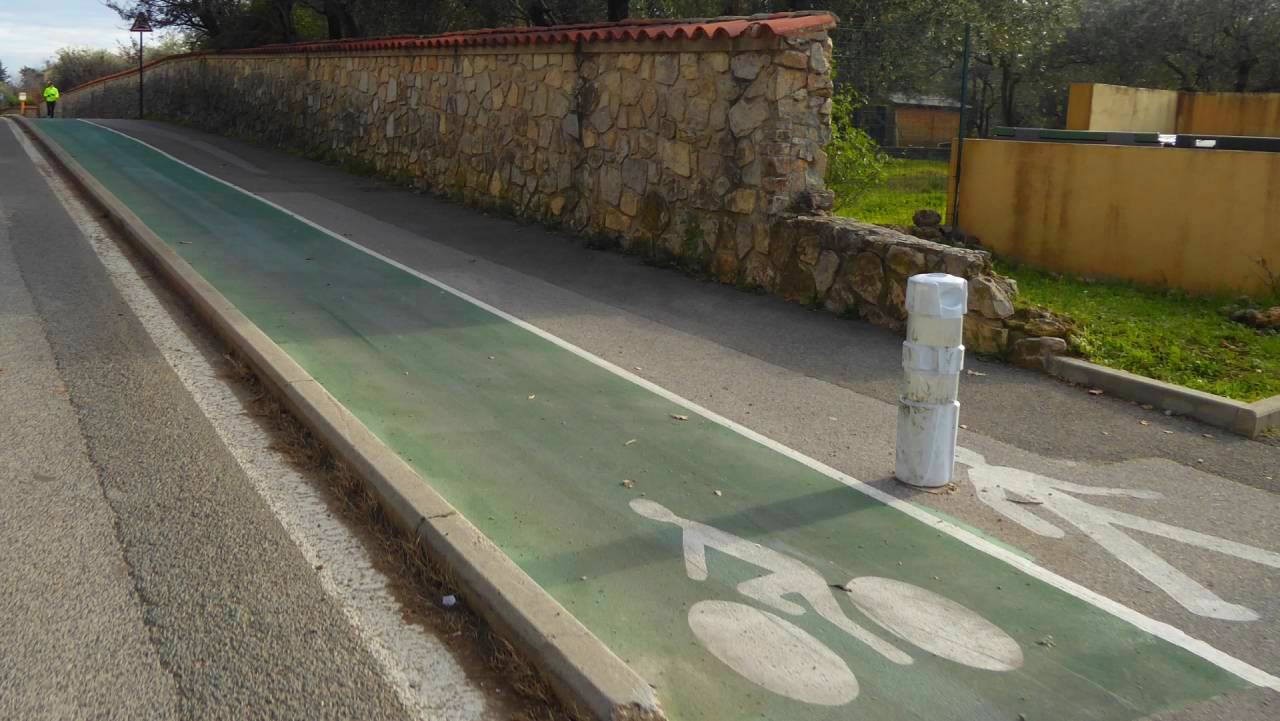 East of the river Nartuby crossing is a short cycleway. 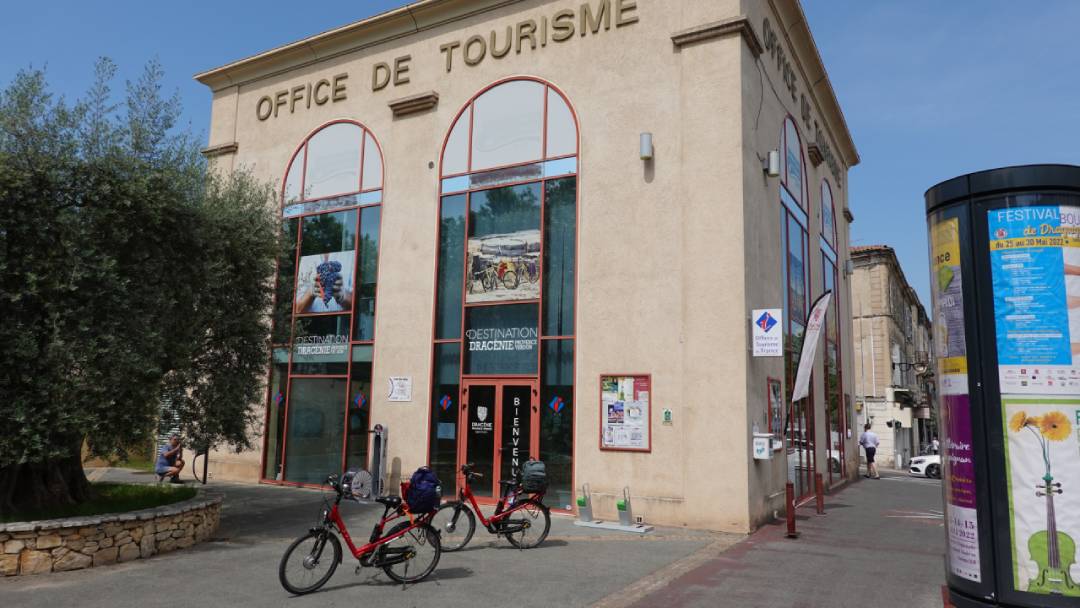 Here the EV8 connects with the Vigne a Vélo cycleway to les Arcs. 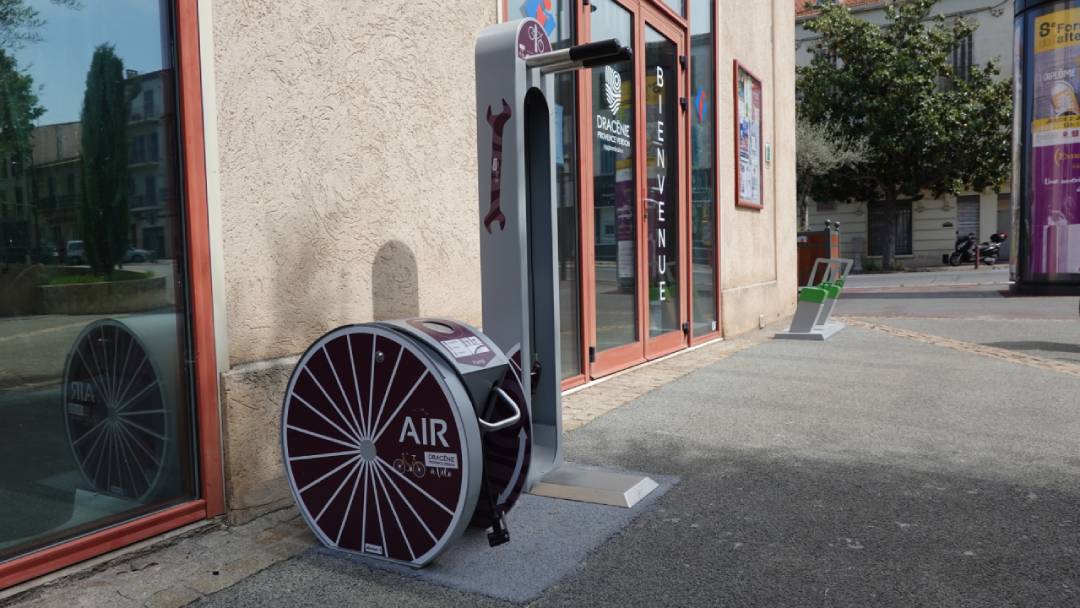 There are some useful facilities for cyclists outside the tourism office – an air pump, a work station with tools where you can mount your bike for easy working, and sockets to enable you to charge your electric bike.