Much of this 21 kilometre stretch follows provisional signage, installed as part of the “jalonnement” initiative. This involves signs giving details of distances and directions on quieter roads, until such time as the full EV8 is completed.

At times these signs take you onto the busy D561 main road. However, some sections follow the old railway line along what are now quieter back roads.

We have tested out alternatives, but have found them to be no better than this official signed route. The most unwelcome stretch of main road is at the border crossing between Bouche du Rhone and Var. But there is no alternative available. The route of the old railway line to the west of the border is heavily forested, whilst at the border itself the road has probably eaten up parts of the railway route. With all this in mind, here is our recommended route.

If you are getting off a train at Meyrargues station, you come out onto a car parking area that was once the terminus of the Meyrargues-Nice line that the EV8 follows. The line arrived at right angles to today’s station, as the photograph shows. In fact there were originally three stations at Meyrargues. Thus the small hotel that sits outside the station was once named Auberge des 3 Gares. It is now a brasserie.

Much of the route of the old line out of Meyrargues has now been built over. The signed route therefore brings you on to the busy D96 (turn left) for around 300 metres, before you turn right through somewhat grand gate posts.  200 metres farther on you cross the small Canal de Peyrolles, which provides irrigation water for local farmers. to follow a quieter back road. Turn left to follow the track alongside this waterway until you come to a bridge across the much larger Canal de l’Edf. Turn left on the south side, to follow the Chemin du Canal for 3.5 kilometres. This is used by a fair amount of local traffic, but without the heavy through traffic of the D96 to the north.

Taking this route avoids the first station stop on the old railway line – Peyrolles.  If you want to visit that village, you can continue along the north side of the Canal de Peyrolles. Instead of crossing the Canal de l’EDF, take a left about 50 metres before the bridge and follow the small chemin for 100 metres. At the crossroads, turn right on to the Route de Plan. This quiet track takes you directly into Peyrolles. To rejoin the EV8 signed route, cross the rue Aimé Bernard on to the Rue du Saint-Sépulcre. This narrow street takes you to the Rue Sainte-Anne, where you turn right and head south to another bridge over the Canal de l’Edf. The Rue Sainte-Anne crosses the route of the railway, and you can see an old station building if you turn left at the mini roundabout 100 metres before the bridge.

Back on the Chemin du Canal, you come to the first jalonnement, where the signage takes you on to the busy D561. The railway ran parallel on the south side, and there are small remnants still in use. But most is impassable at present.

However, there is an advisory cycle lane along most of this stretch. It disappears briefly a couple of hundred metres down the road, but persevere, as it widens farther on. After 1 kilometre, watch out for the sign “Ch. de Mallevielle” on the left, at a junction of two small roads that join on the D561. Turn half left here on to the track ahead of you with the 30kph speed limit sign, the chemin de Mallevielle.  Follow this road until you cross the river Real. Following a short but steep climb, you come to the D61. Turn right, and follow the road all the way into the village of Jouques. This quiet road climbs gently into the pleasant village of Jouques, where you can stop to eat or stock up on drinks.

Jouques to the Border

In Jouques, the Avenue de la Gare runs parallel to the main road on the south side. The signed route takes you to it. Follow this street east and you will pass a familiar building on your right, the old Jouques station. Here you rejoin the route of the old railway line. Follow the signage on to the Chemin du Couloubleu, and then on to the Chemin de la Palunette. This is a pleasant few kilometres until we reach a t-junction with a sign for the Chateau de Revelette. Behind the sign, an old railway building suggests the railway line once continued on into the now dense forest. Turn left here, crossing the bridge over the Ruisseau de Saint Bachi. Turn right on to the D561. The next 2.6 kilometres are probably the least pleasant on this whole stretch. The road narrows towards the border between Bouche du Rhone and Var. There are several bends where motor traffic should really avoid trying to overtake cyclists. This stretch is probably the most difficult for planners to solve, and will take money and creative thinking to make it safe.

Fortunately, once in Var, you can very quickly turn off the main road and back towards the old railway route. Around 700 metres after you cross the border, there is a signed turning to the left. Take this track, which then follows the old railway. It runs between the main road to the south and the Canal de Provence to the north, a very enjoyable 5.5 kilometres all the way into Rians.

On the way, we stopped at an archeological dig at les Toulons/La Vicarie. The site is right alongside the EV8, and has recently been covered by an array of solar panels. The site was first discovered in 1962, and was the subject of an excavation programme run by the Centre Archéologique du Var between 1993 and 1996. This operation uncovered the pars fructuaria with a wine-making installation, a tile-making oven and a mausoleum. It’s existence is believed to go back as far as the 5th or 4th century BC. 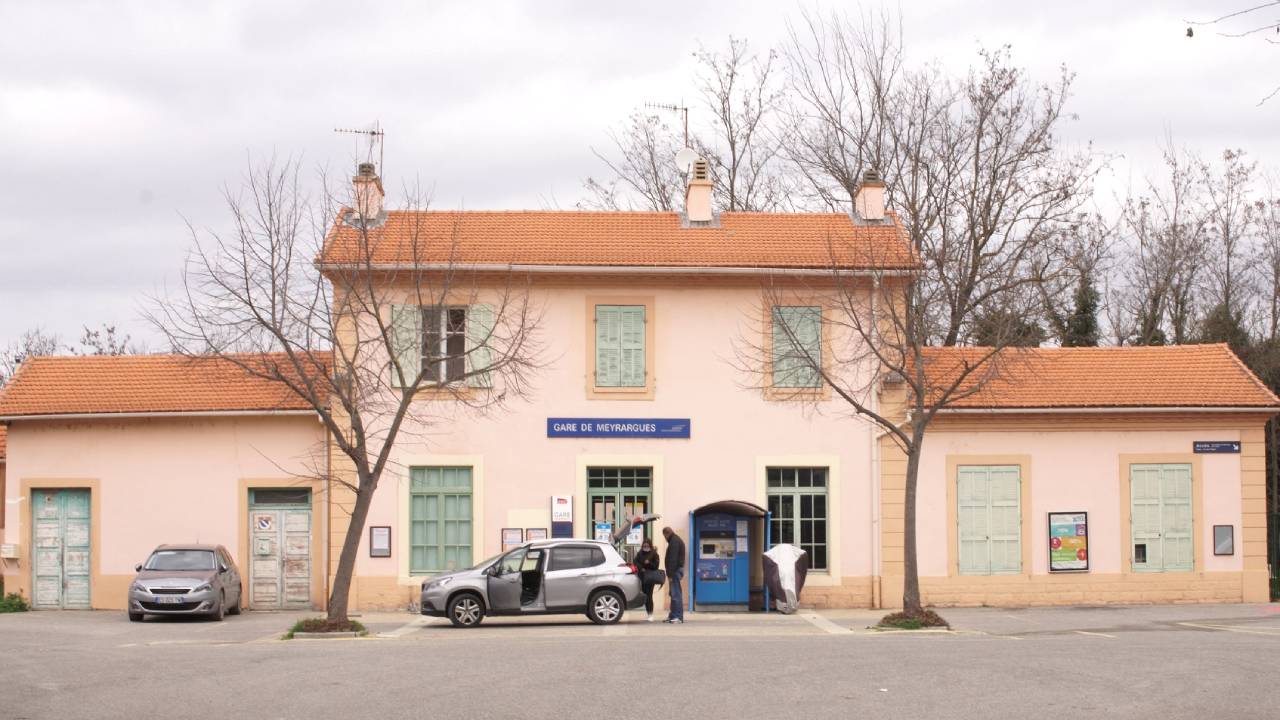 Our stretch of EV8 starts here. Trains run regularly to/from Marseille. You can bring your bike on all trains for free. 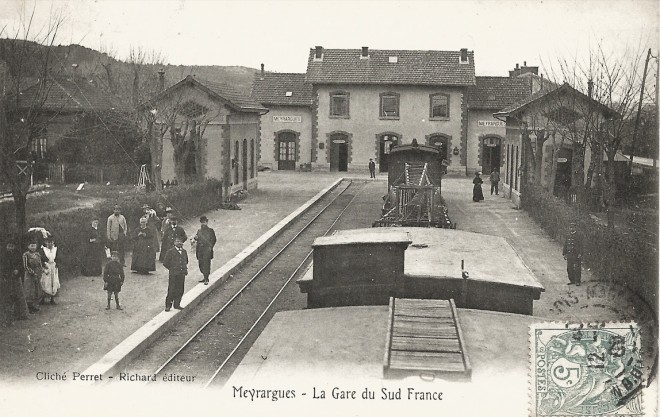 The three stations at Meyrargues

Today’s car park outside Meyrargues station was once the terminus of the Train des Pignes Central Var. 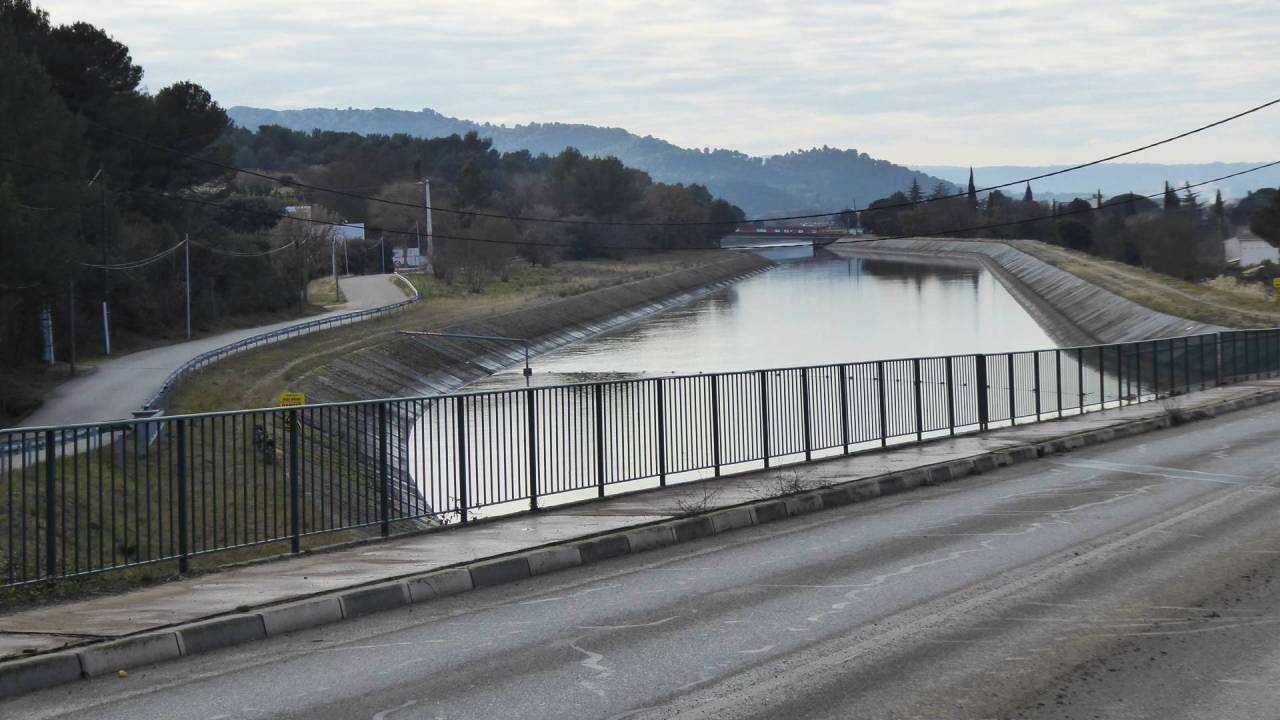 After leaving the D96, the signed route takes you across the EDF canal. You then cycle along the southern side. 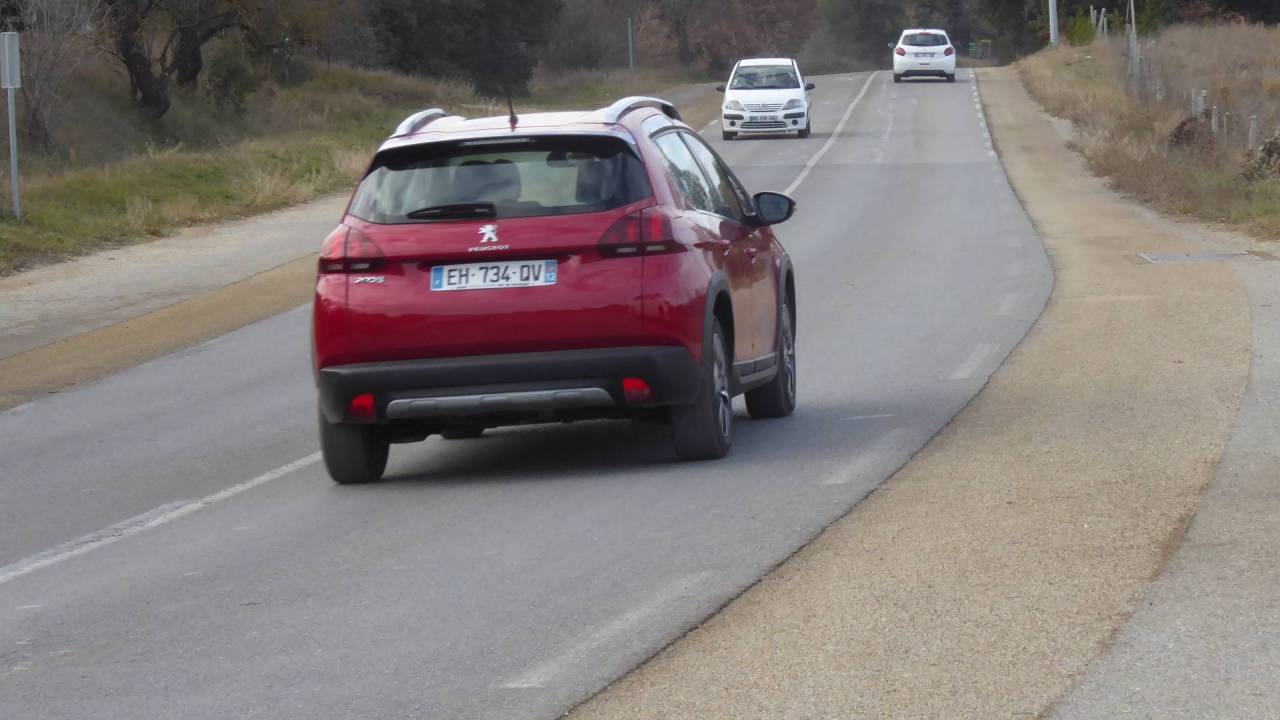 Cycle lane on the busy D561

From Meyrargues, you follow the canal to the D561. On this road, there is a cycle lane until signage takes you on to a quiet lane. 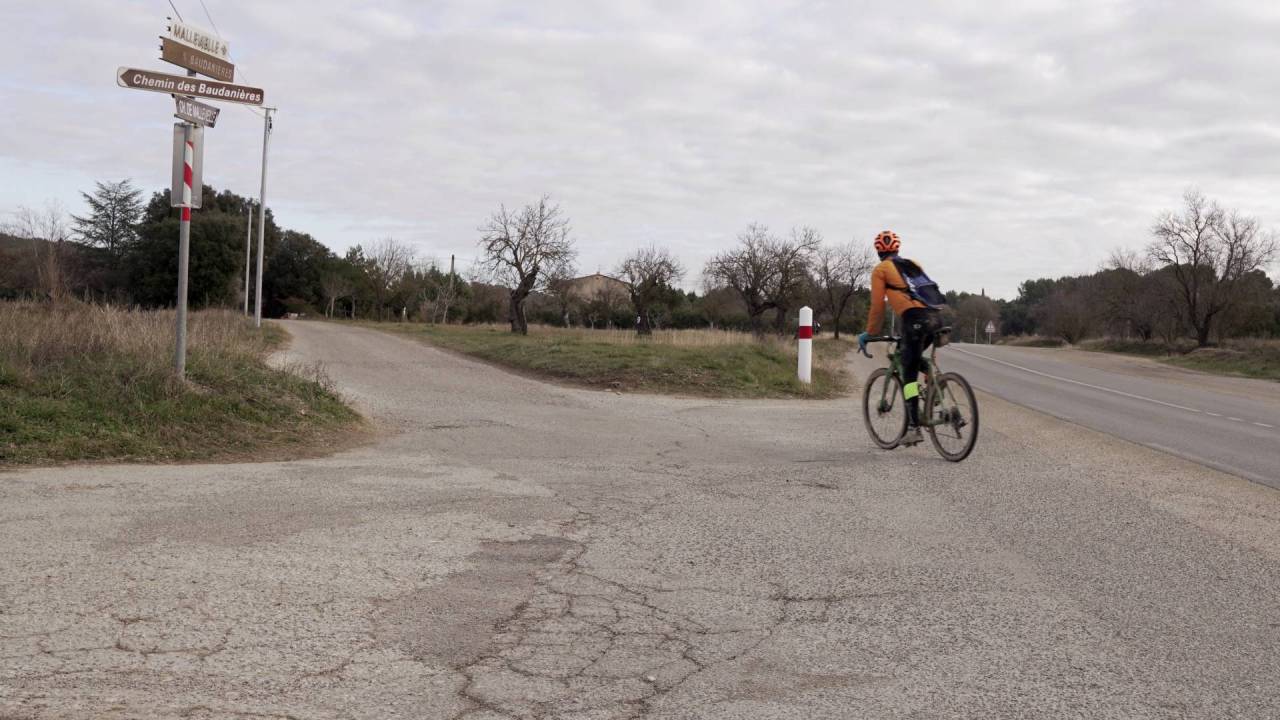 Turn off the D561 at Mallevielle

Here you are led on to a small lane that joins the relatively quiet D61. You then descend into the village of Jouques. 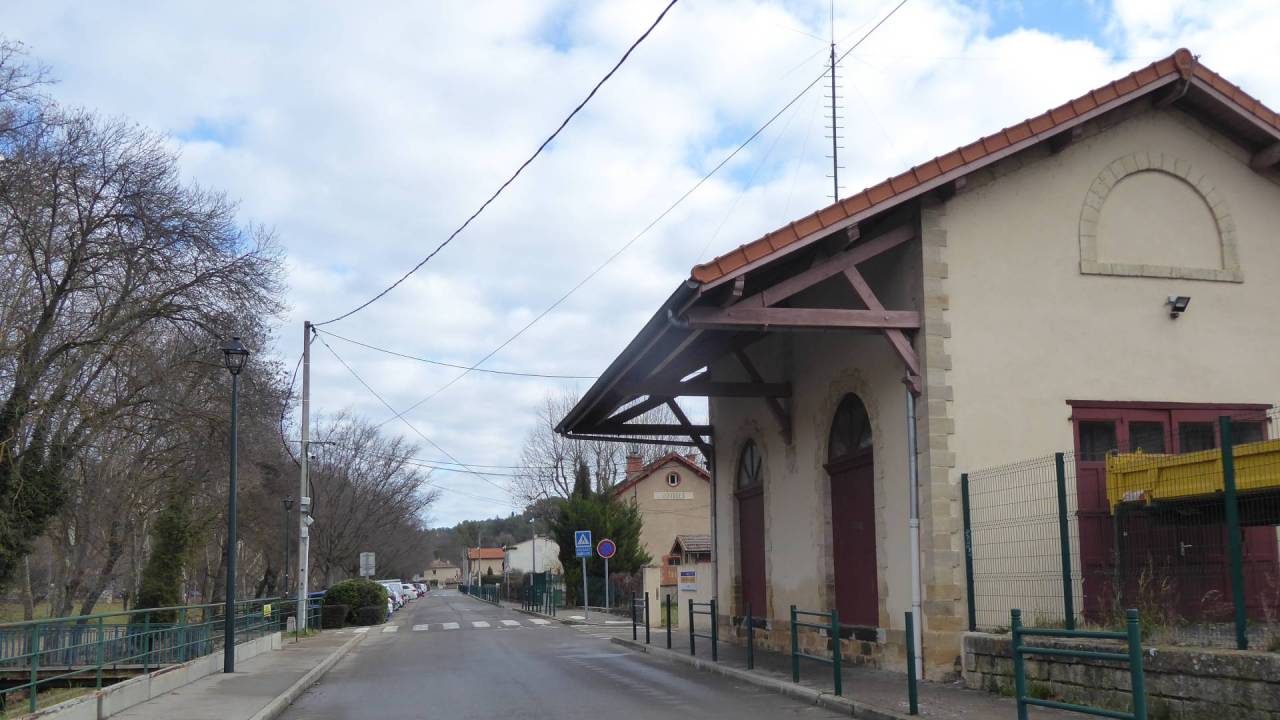 Once in the village of Jouques, you can join the old railway line route for the first time. Here are the old station buildings. 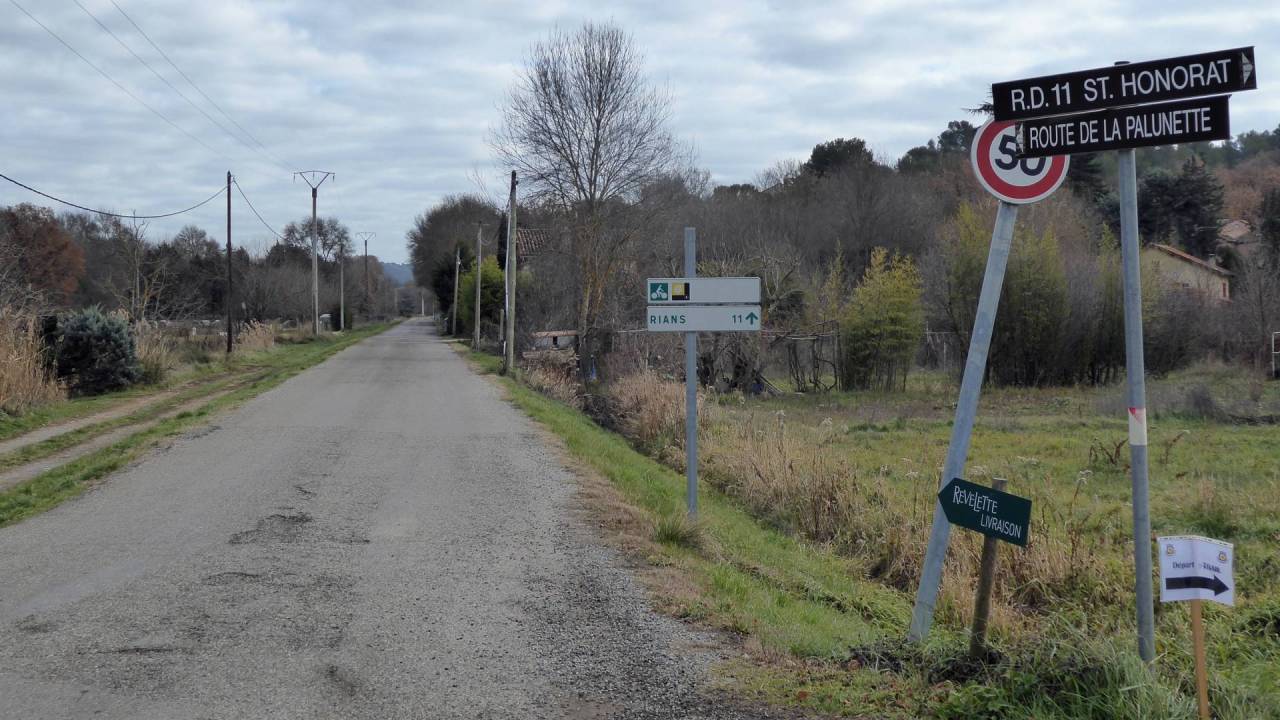 East of Jouques there are a few kms of quiet country lane.  You rejoin the D561 2 kms before the départment of Var. 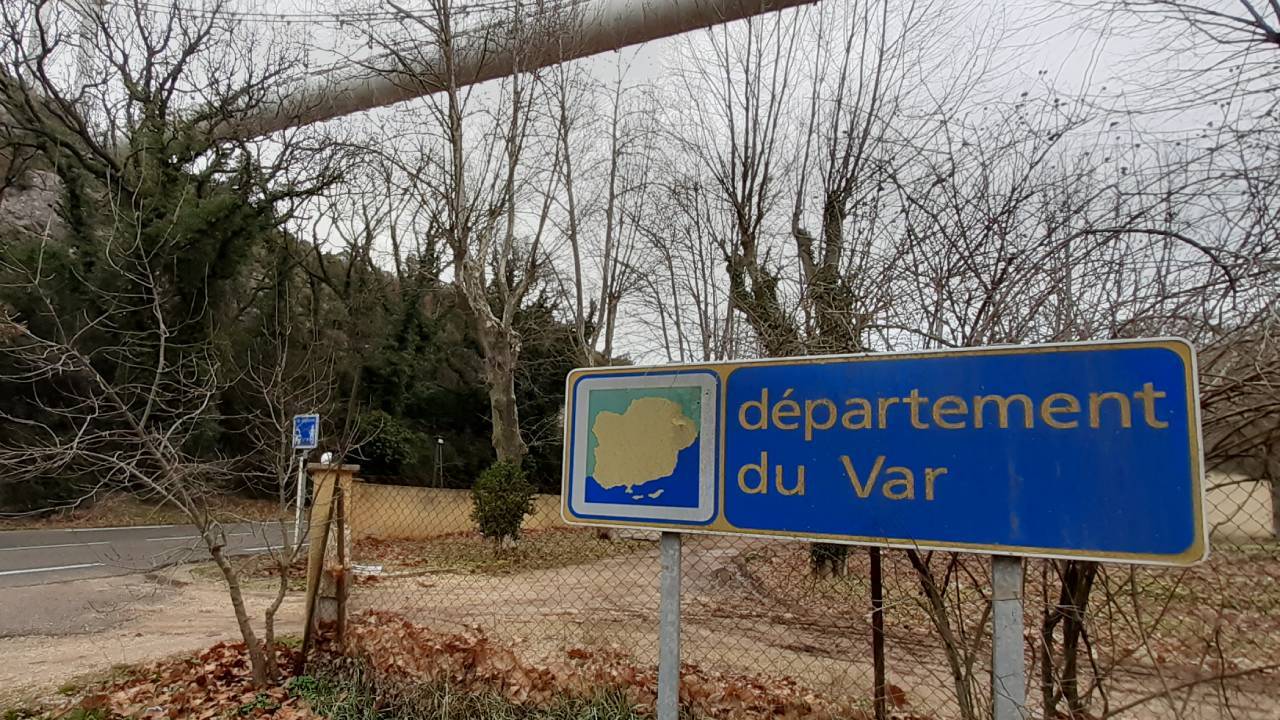 The border between Bouches du Rhone and Var can get pretty busy. Planners have little space for a separate cycleway. 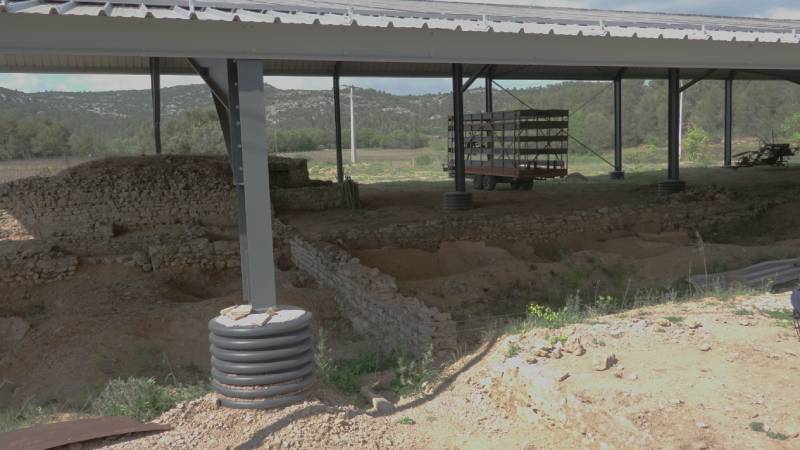 This ancient winery is located a few kilometres west of Rians, right on the EV8. It goes back to the 4th or 5th century BC.