If you are into railway architecture, this is a route for you. It includes some beautiful single-arch bridges over the cycleway, three recently-surfaced tunnels, and a curious train halt looking more like a bus stop at Sauve-Clare.

This 9 kilometre stretch of completed cycleway was officially opened in 2018.

There is little motor traffic using parts of this stretch, But you need to be careful when entering the tunnels.

The cycleway starts at the old Lorgues railway station, on the north west corner of the town. It then skirts the northern outskirts, passing through a fairly busy suburb. But once out of the urban area, the cycleway becomes a dead end for motor traffic, and cycling is car-free for a few kilometres.

The first two kilometres involve a gentle climb out of Lorgues. This is followed by a lovely, but gentle, three kilometre descent. We free-wheeled pretty well all of the way. Cars reappear here as a few isolated houses are passed.  At the bottom is the river Florieye and the hamlet of Sauve-Clare. Just before you reach it, on the left, is a little stone shelter. This was the Sauve-Clare halt. Inside it you will find information about the old railway line, and the building of this train halt. It was built in 1898 at a cost of 1500 francs. It was only available to passengers without heavy luggage. The train only stopped on request.

After passing through another archway at Sauve-Clare, you eventually come to the first of three tunnels. All three have been resurfaced with the most beautifully smooth finish. The first two are well lit. The shorter third is not. We passed a few cars using these, though to be fair they were all driving at a slow pace.

The cycleway is now gently climbing back up from the river Florieye towards Flayosc. Around a kilometre before  the end of the designated cycleway, you pass the outdoor adventure park of Flay’Forest. Known as “accrobranche”, for much of the year, families come here to play Tarzan in the forest. 500 metres farther on, and the cycleway veers off to the left of the old railway line and climbs a short steep hill. The old railway buildings to the right were probably Flayosc station.

Here a sign announces the end of the cycleway. From here on east, the EV8 will be following provisional routes. 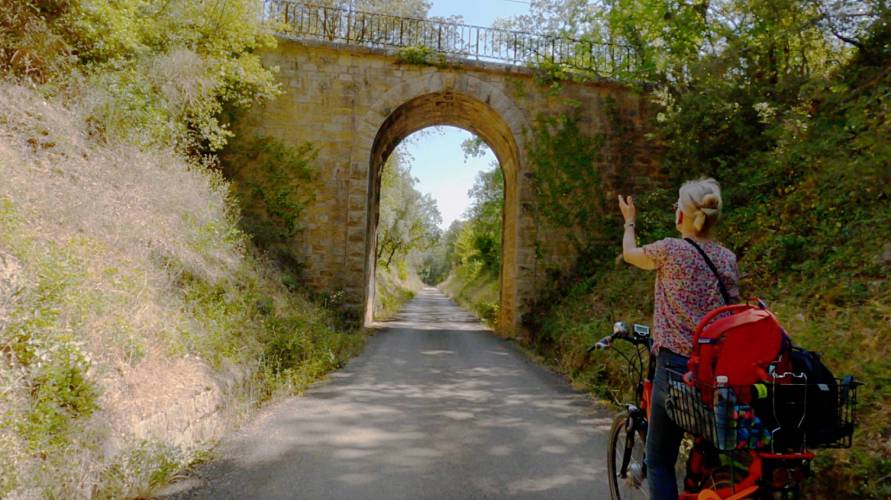 There is some impressive railway architecture on this quiet route. Here is one of the many arches encountered along the way.
. 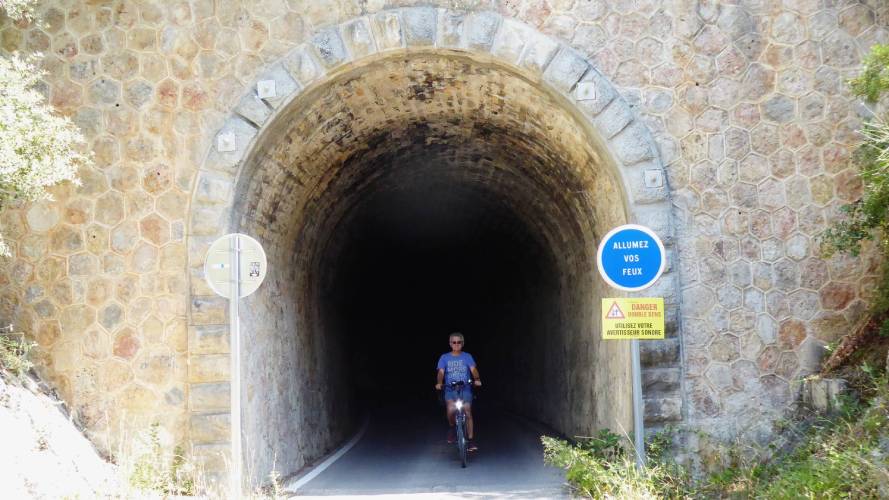 There are three tunnels towards the Flayosc end of the route. All have super-smooth surfaces, and the two longer tunnels are well lit. 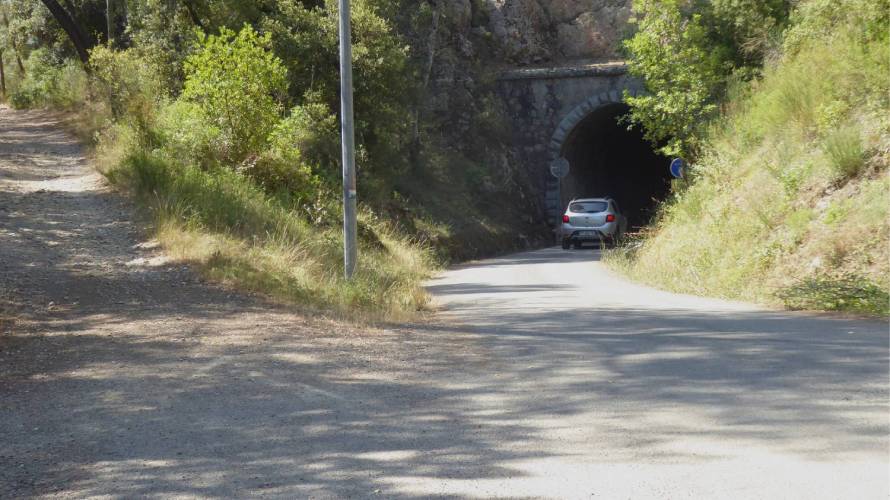 However, some local motorists use these tunnels. They are usually very aware that cyclists might be coming in the opposite direction. 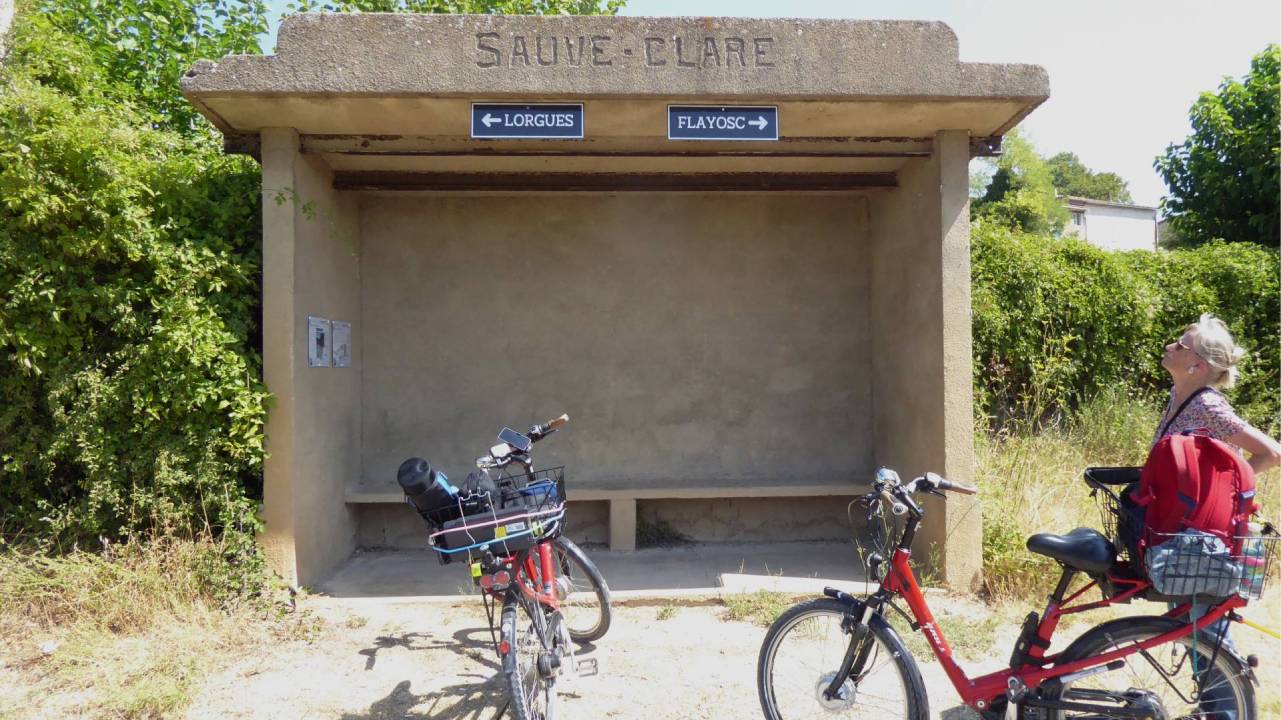 This interesting rail halt has been rennovated with the opening of the cycleway. It is used as a small information spot. 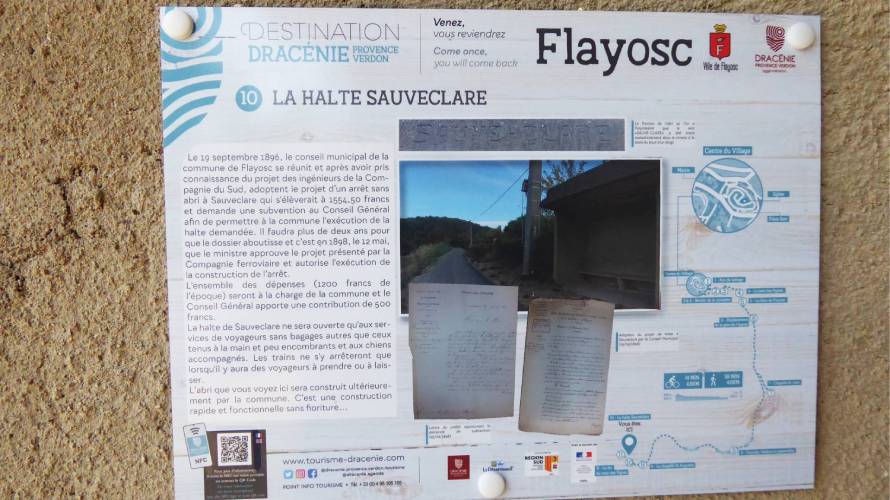 One of the information boards in the Sauve-Clare halt. 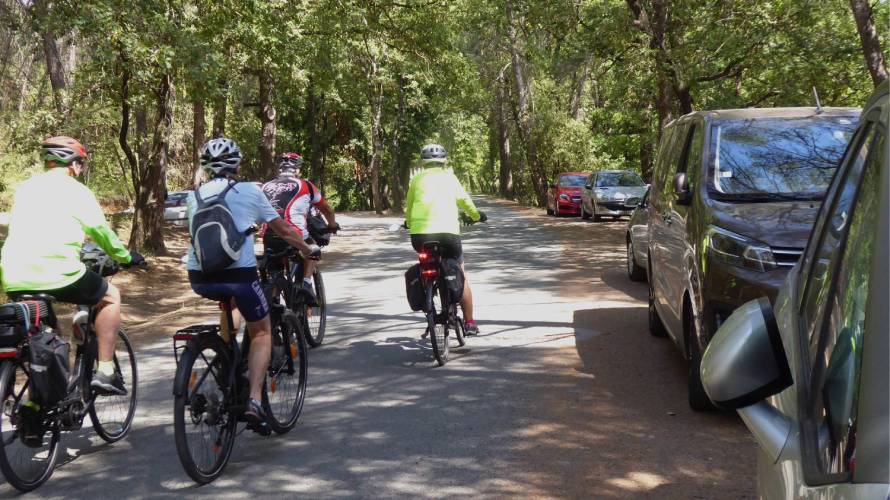 Since its official opening, this stretch has proved very popular locally, and is certainly encouraging more people to cycle.