Just shy of 9 kilometres, this stretch is nearing completion. Gentle gradients along much of the way. There is one missing bridge over the main road, but crossing is easy. Plus a surprise way of separating cyclists from the Salernes by-pass.

We filmed this stretch in December 2021. Besides the cold weather we noticed that, since our last ride here in the summer, there were ongoing improvements in Salernes.

On the final leg of this section, as the route drops down into the centre of Salernes, an excellent new cycleway has recently been built. However, when we cycled the route, signage was not yet installed. This caused us a bit of confusion, which we’ll explain below.

Much of this stretch is on the old railway route. In many places, the route has been maintained for (motoring) local residents living along the line. But as you approach Salernes, you’ll find the old railway route taken over by a fast and wide by-pass. Fortunately, a protected cycleway has been installed, at least on one part of the stretch. There are cycleway signs along much of the route, suggesting that this has “official EV8” status.

Starting from the primary school building in Sillans, there is a shared footpath/cyclepath heading east. This can get pretty busy with tourists in summer, as it leads to the waterfall that gives “Sillans- la-Cascade” its name. But after a few hundred metres, the path to this veers off to the right. After passing a barrier that prevents cars from accessing this path, the long slow descent towards Salernes now begins. Unlike the adjacent main road, this smooth-surfaced path follows a gentle descent. A number of cuttings through the rocks reveals the work of 19th century railway engineers. A small allotment on the left is followed by the odd track servicing isolated houses.

After about two kilometres, there is a short steep descent and climb to cross the D560. The remains of a bridge are still evident. It is unlikely to be rebuilt. Further cuttings and isolated houses follow. Four kilometres out, a bank of letter boxes on the left announces the approaching main road. This is the D31 to Aups which you have to take now. We encountered heavy lorries on this 500 metres stretch so take care.

A short descent leads to a large roundabout. Cyclists are led on to the north side of the carriageway. Here there is a protected cycleway along part of the Salernes by-pass. After about 500 metres this converts to a cycle lane on either side of the road. If you are travelling east, cross the main road here. The cycle lane then continues all the way to the Villecroze roundabout. There’s an EV8 sign to turn right on the main signpost.

This is where EV8 signs ran out. We followed the road down into Salernes without seeing another EV8 sign until we reached the Eurovelo8 car park – our starting point for the ride to Lorgues. After a bit of research we discovered the problem. Signage has yet to be installed guiding cyclists to a new cycleway. This closely follows the old railway line into Salernes, passing the station buildings. We have confirmed with the administration that new signage will soon be in place.

To reach this cycleway, don’t turn right at the Villecroze roundabout. Take the second exit, and continue on the D560 (towards Draguignan) for 300 metres. Turn right here, directly on to the new cycleway.

The cycleway leads past the old Salernes railway station buildings to a zebra crossing over the D2560.  Continue on to the shared cycle/foot path, turn left into the Intermarché car park, then right on the other side. This leads to the Eurovelo car park, and the cycleway to Lorgues. 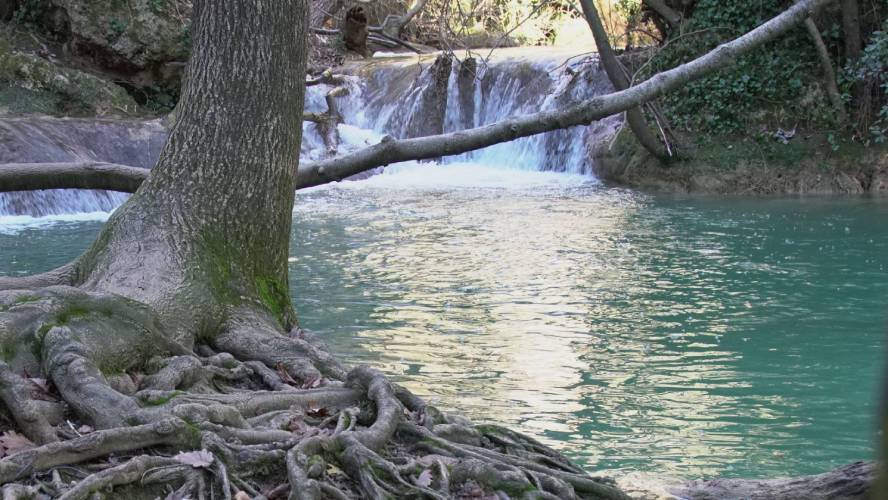 The waterfalls at Sillans-la-Cascade. They attract thousands of visitors in summer. 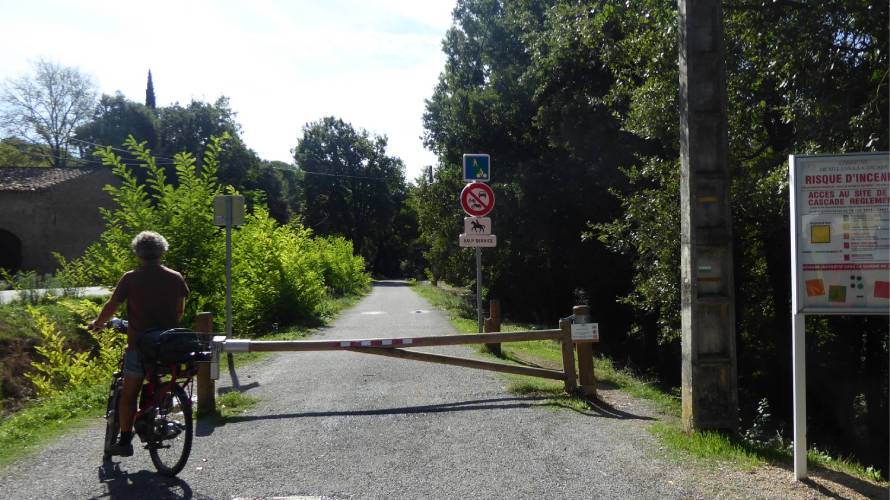 At Sillans, there is a shared path for pedestrians and cyclists. Cars are stopped by this barrier. You can also see the official EV8 signage. 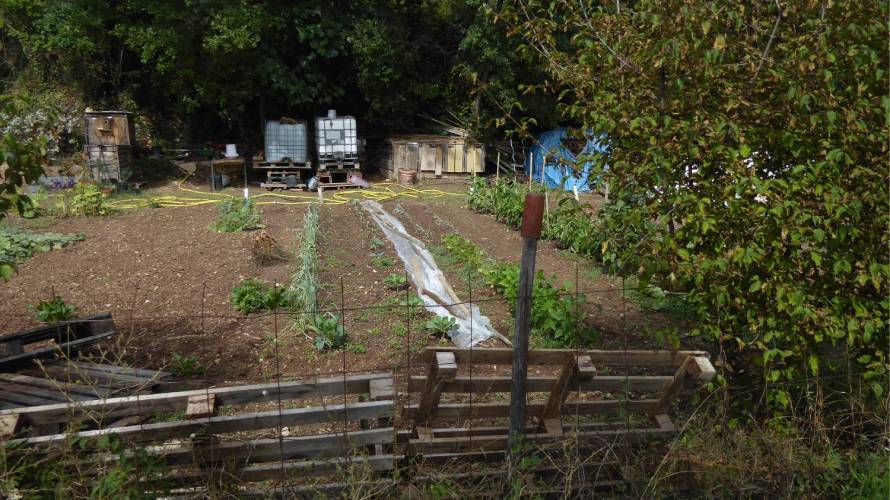 This allotment is just outside Sillans-la-Cascade. A very few local residents use the cycleway to access these gardens, as well as some nearby houses. 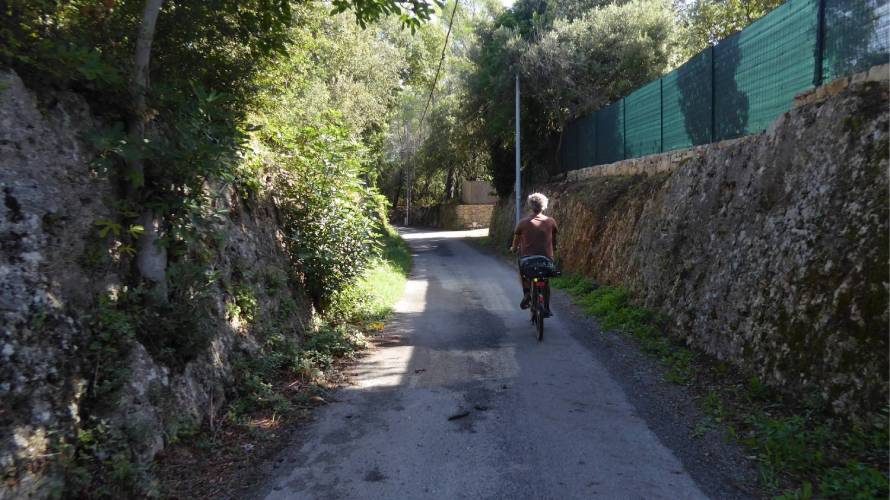 More houses along the cycleway. 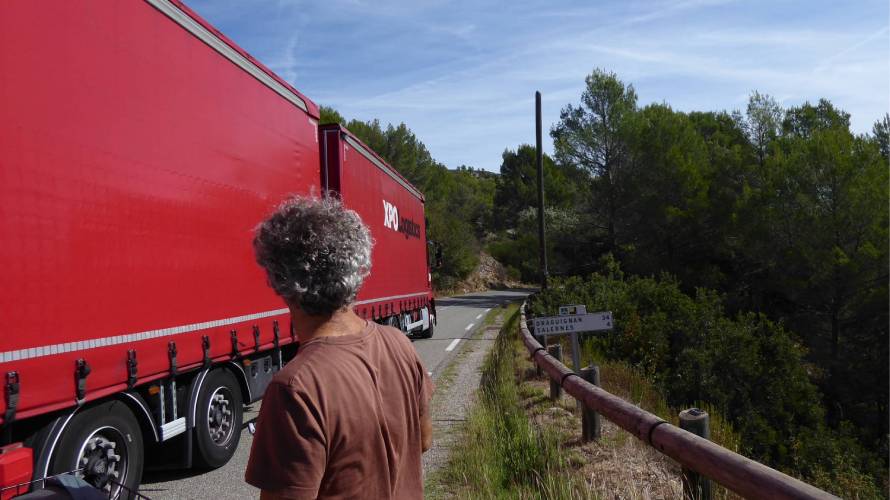 To access the Salernes by-pass, you need to use the D31 Route d’Aups for a few hundred metres. It can be busy at times. 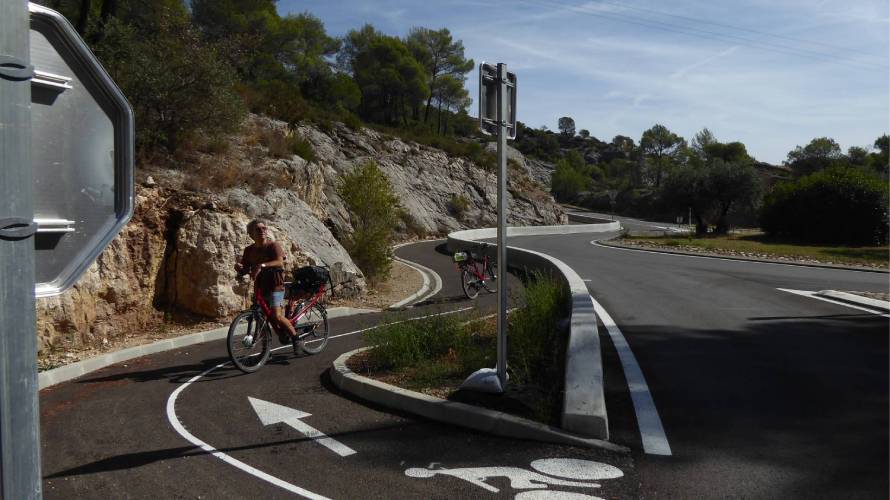 This novel cycleway has been built on the Salernes bypass. Separation is even effective against military hardware! 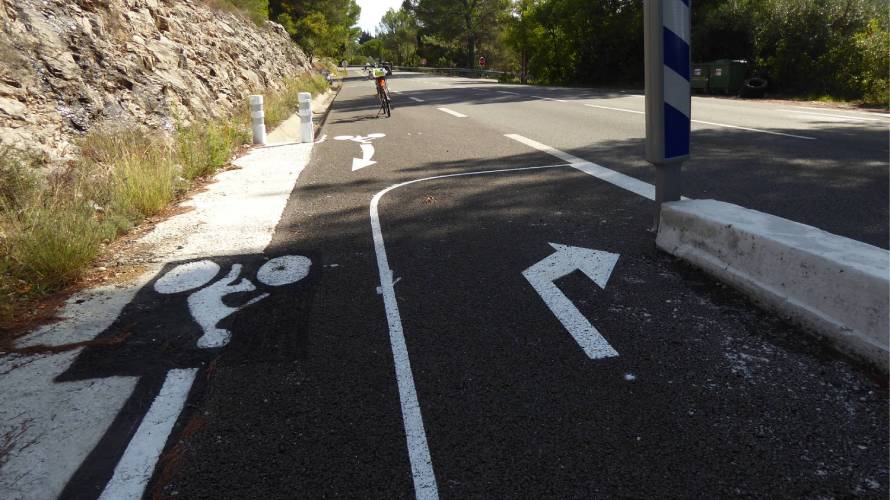 Cycle Lane on the Bypass

But the separation ends after a few hundred metres. For the remainder of the bypass, cyclists can use a cycle lane instead. 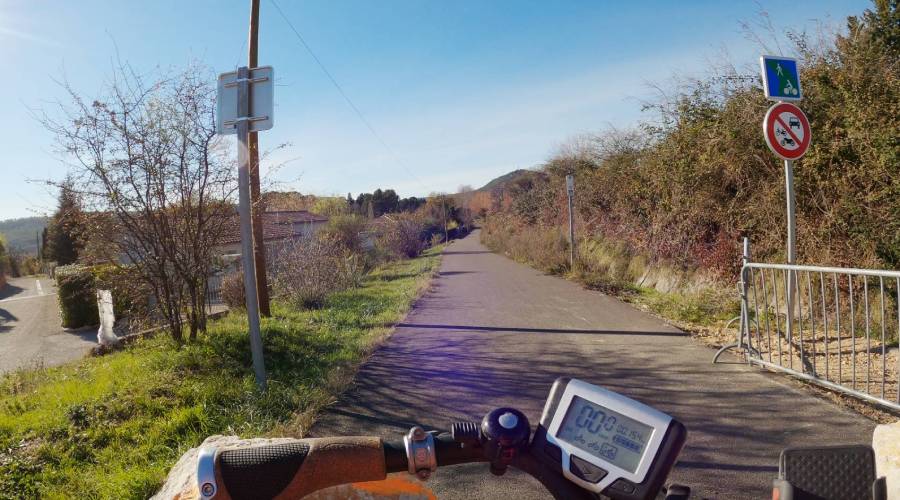 When we rode the route in December 2021 this new cycleway had just been built. Signage connecting the bypass should be in place by the time you read this.