“Utility cycling encompasses any cycling done simply as a means of transport rather than as a sport or leisure activity. It is the original and most common type of cycling in the world.”

Utility Cyclists - a guide for politicians

A key aim of the eurovelo network is to encourage many more people to cycle. In countries where cycle use is high, such as Germany, Denmark or the Netherlands, utility cyclists form the overwhelming majority of bicycle users. They do not wear any special clothing (except perhaps rain wear), hardly ever ride racing or mountain bikes, and helmets are worn by a small minority. They cycle to work, take their children to kindergarten on their bikes, go shopping on their bikes and also enjoy cycling on holiday with the whole family. Kids are used to riding to school on their bikes.

On the other hand, in countries where cycle use is low (such as France), there is confusion about utility cycling. The most common cyclist uses the bicycle for sport, and in many cases for extreme sport. So much like formula 1 drivers and cars, the dress sense is quite different – helmets, lycra and special shoes.

As the EV8 develops here, more and more local people are trying out cycling. Increasing numbers of people are digging out their old bikes, or buying new ones, to try out the new, safe, car-free stretches of cycleway. Though the sports role model for cycling  still dominates, there is a growing awareness that cycling can be easy and fun rather than extreme and exhausting. So how can local politicians build on these changes? Can the EV8 help move a community from niche activity cycling to popular utility cycling? 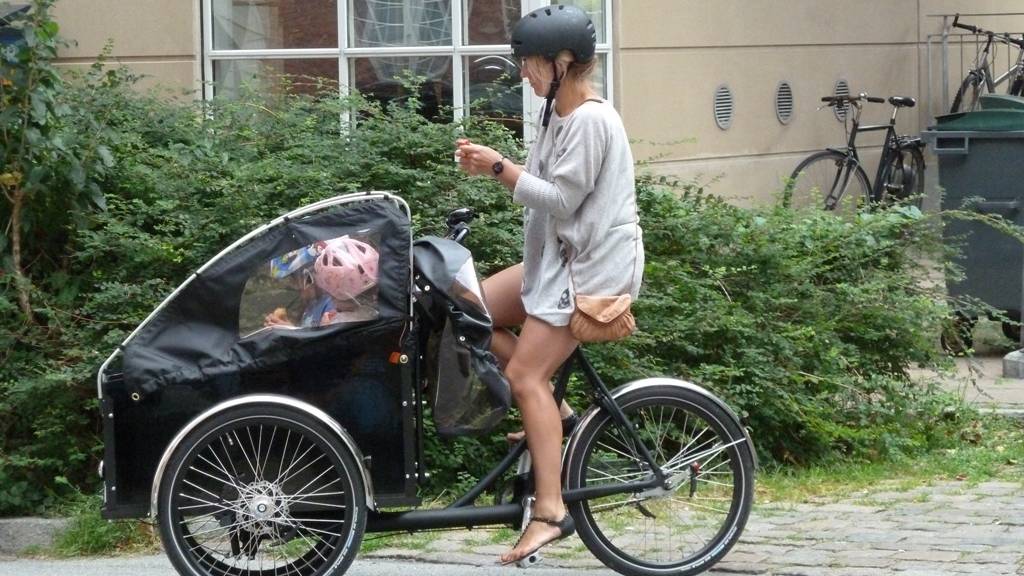 A Copenhagen mother with her children

One approach is to develop cycling-visitor-friendly policies. In the village of Pontevès, the mayor has taken up the theme and promised in a pamphlet before being elected: “In connection with the EV8 cycle path (Cádiz/Athens), which ends on the old railway line, we will think about a specific reception facility for cyclists in order to become a listed stopover municipality.”

A first step would be to install good quality cycle parking in the village. A second would be to encourage more village facilities to become Accueil Vélo accredited. And a crucial third is to make the roads in and around the village safer for cyclists.

Cycling visitors from the north are not so much looking for adventure as for relaxation, aiming to get from A to B safely with their children. So they look for safe infrastructure. A majority of such cyclists find riding on country roads in mixed traffic pretty unattractive. The roads and paths in the villages need to be made safer for them.  A speed limit for cars  can help here, but other measures can be more effective. One small step taken by Pontevès, for example, has been to make the market on Friday mornings closed to motor traffic. This also has an added positive effect for pedestrians.

A bicycle-friendly policy would also be of great benefit to the villagers. Little by little they could find out how much fun everyday cycling can be and how healthy it is for them. They don’t need any special clothing for it, they just need a sensible bicycle that can carry a bag or basket, and is equipped with a bell and light. Ideal for a hilly landscape is also a pedelec, a bicycle with electric support.

Nothing works without good infrastructure

EV8 offers villages like Pontevès a great opportunity. Cycling without the threats posed by car traffic attracts people who like to cycle in a relaxed way. With the EV8 in place they will be able to visit their families and friends in the neighbouring villages of Varages and Sillans-La-Cascade and beyond without having to use a car.

At a time of soaring oil prices, when health becomes more and more an issue, when the effects of climate change are getting unavoidable, cycling offers a cheap, joyful, healthy and easy every day solution.