18 kilometres of mixed quality, including road, dirt track and quiet lane. Some tracks used by local farmers are passable in dry weather. The route is flat throughout. The main road, quiet at times, must be used for around half this stretch.

As the Conseil Départmental slowly works westward from Flayosc, the stretch from Rians to Varages is, as yet, not due to be developed until 2024.

Provisional signage has been installed, leading cyclists on and off the route of the old railway line on a fairly conservative basis. If the route has been properly surfaced, it is regarded as useable. If not, travellers are led on to the busier D561.

However, much of the railway line route is used by local agricultural traffic, and in certain places is distinctly passable for touring cyclists. This means that there are often alternative routes that you can choose from, depending on your personal preferences as well as the weather. In the video below, we took the railway line route from Rians to some 5 kilometres west of Varages, where the line crosses the main road. But at different stages there are alternatives. Here are the stages, step by step.

The old Rians station sits on the north west edge of the village. From here, signage leads you on to the D3/D561 by-pass. Then, as you travel east out of Rians, the official signed route takes you along a paved section of old railway line, running south of, and parallel to, the D561. You can spot the signage on your right just after the gravelled waste recycling area where the Avenue du 19 Août 1944 joins the D561. The surface eventually becomes a dirt track, but in dry weather you can continue at least until the Route du Grand Hubac, where you can turn left to rejoin the D561, or continue another kilometre until the old line crosses the main road.

The signed route diverts from this course after 1 kilometre, taking you to the right and up a hill on a small road. This eventually leads back down again farther east until it joins the D561 via the D65 at Artigues. In all this route adds an extra kilometre to your journey, and involves significant hills.

From Artigues, the old line runs parallel to the D561 for around a kilometre. Like the previous stretch, this can be muddy in winter but on dry days is very passable. Google maps has a series of street views shot in 2021 on this section, so you can judge for yourself. There are a couple of points where you can decide to continue on road, or join the old railway route. But where it departs from the road and heads north east, it is worth using the track, as you can now ride along it all the way to St. Martin station. Along the way you pass the beautifully restored Esparron station.

This stretch of the EV8 is the most problematic, and will most likely be the first to be improved in 2024. At the station of St. Martin, the official signed route leads you back to the D561, and from here until Varages you are on the main road. Instead, we tried out the railway line route until it visibly ends on a sharp bend of the D561, some 3 kilometres east of St. Martin station. We found this to be the roughest section of track. There was little mud or puddles, but plenty of loose stones and other debris that made cycling pretty difficult. Really, it depends on your preferences. The route is totally flat, traffic-free, but rough. The main road is smooth but can get busy at certain times of the day.

Once the track joins the main road, you have to use the D561, as there is a collapsed bridge a couple of kilometres along the railway route. The track is even more impassable than farther west, and is unlikely to be improved until the bridge is rebuilt. However, if you don’t wish to go into Varages village itself, you can avoid the steep climb up to it by turning sharp right at the sign for the Chapelle St. Pothin, just before the climb into Varages begins. Follow this surfaced track down and over the Ruisseau de Varages, take the short climb up the other side, and turn left at the track that crosses this road. You are back on the old railway line. 500 metres on and you will arrive at the old Varages railway station on your left, and another 100 metres and you will reach the tunnel that leads you to the Route de Brue Auriac and the direct cycle route to Barjols and Pontevès. 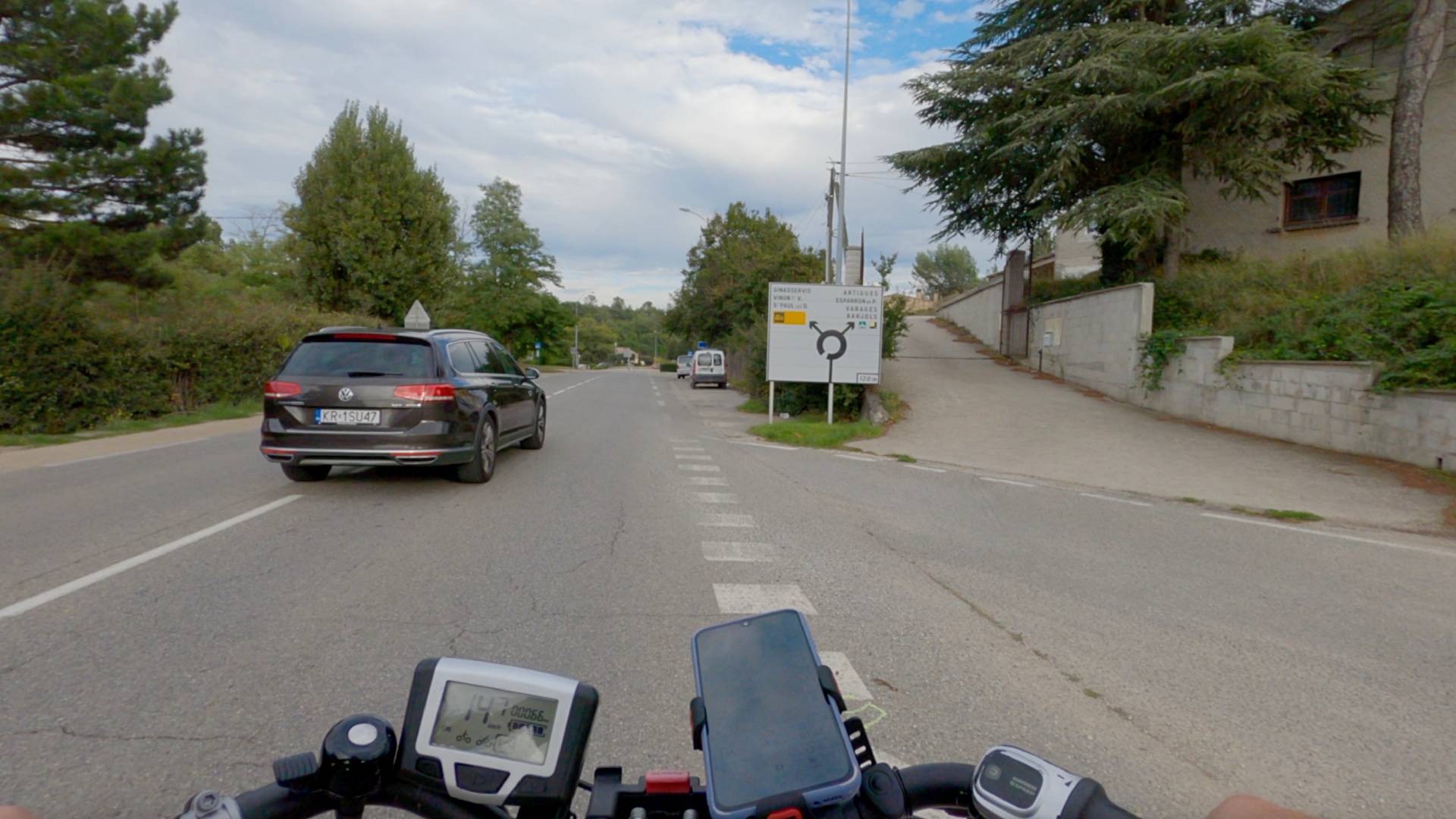 Cycling through the town of Rians is not an option at the moment. Instead, we are taken around the town on a by-pass that can prove busy at times. 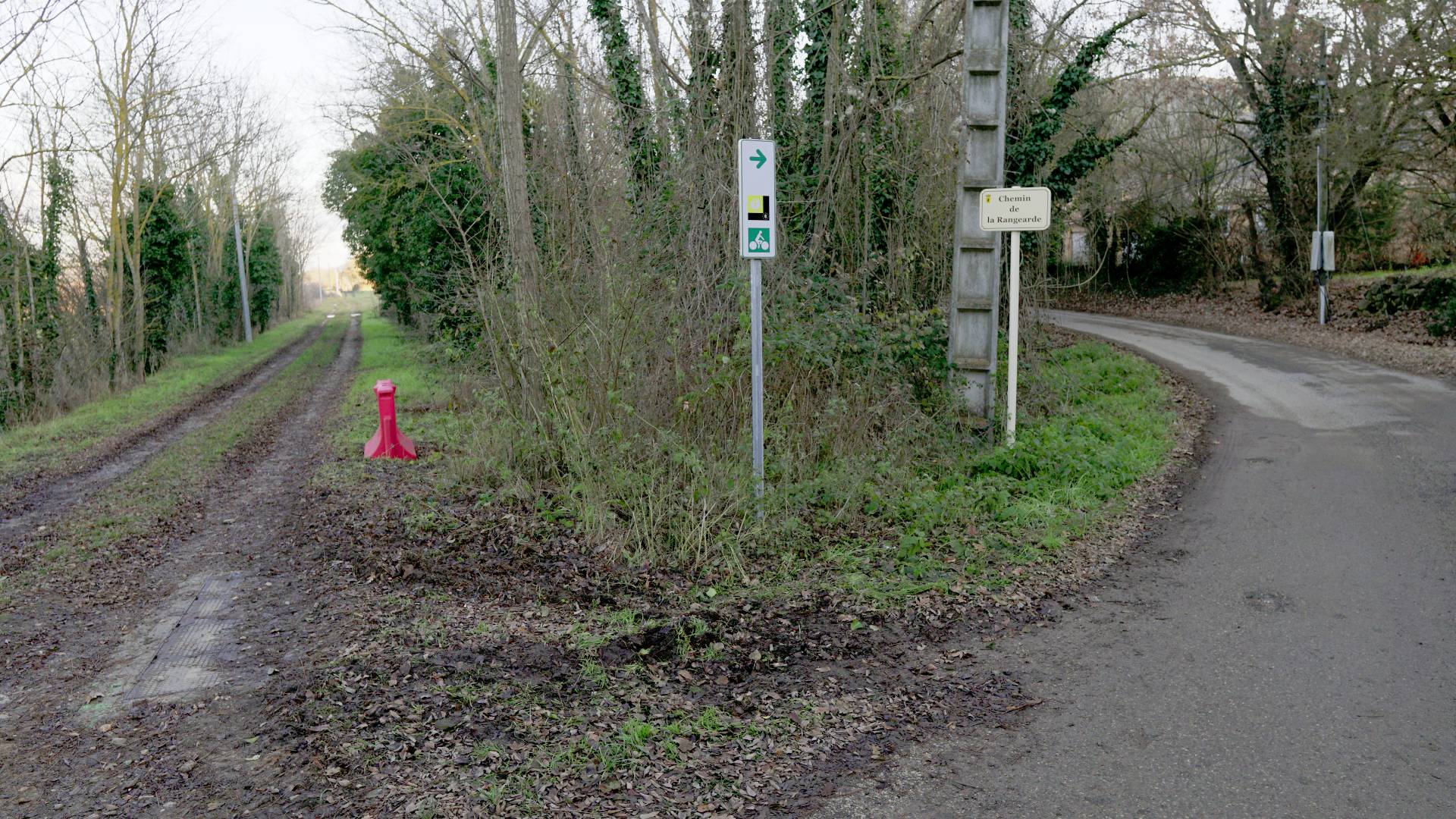 Official route takes to the hills

Two kilometres out of Rians, the official route leads you to the right, up a hillside – and down again. If the weather is dry enough, you can continue on the flat ahead, on the track that follows the railway line route instead. 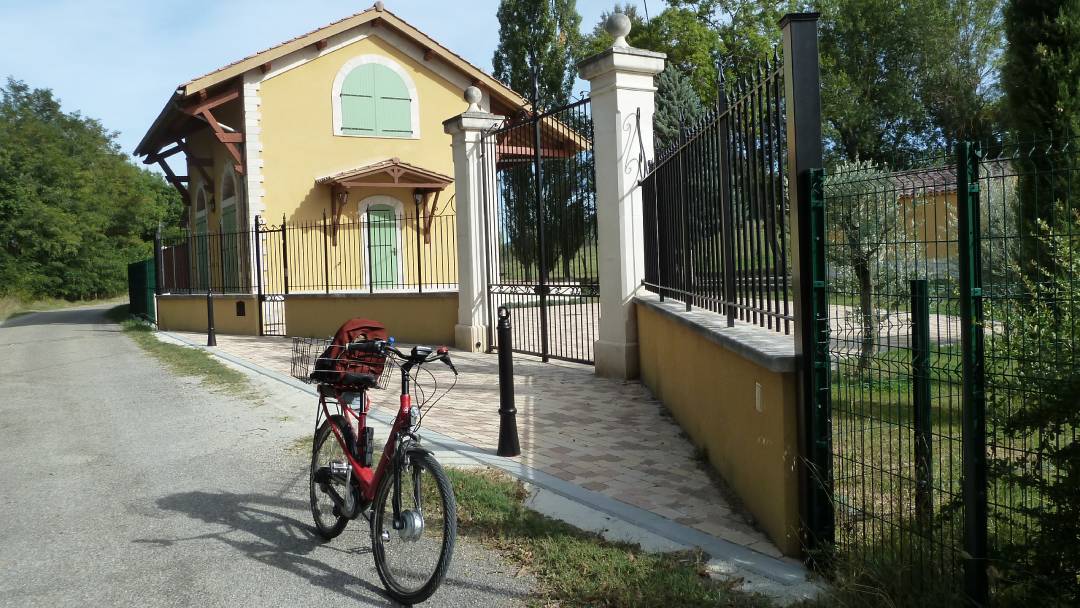 This beautifully restored series of station buildings is now used as a holiday home. Many of the station buildings along the line remain, though in most instances they have been taken over as depots for the local commune. 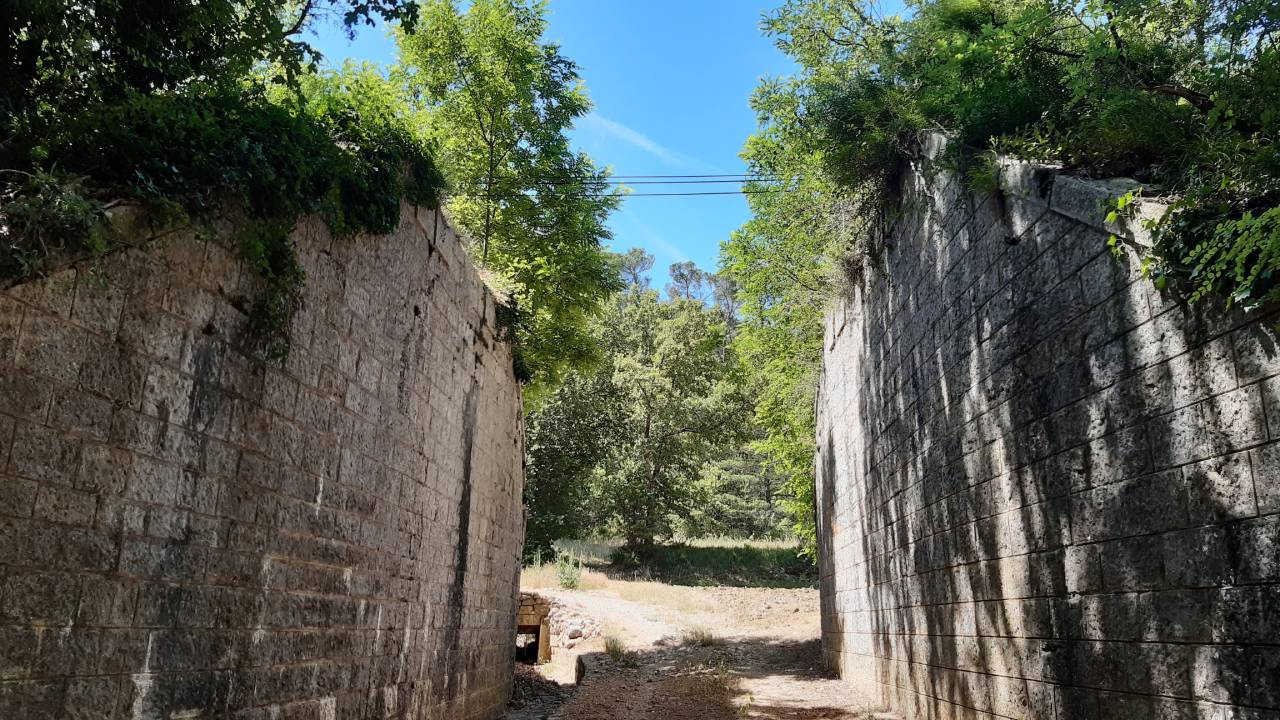 There are several broken bridges along the EV8 in Provence. They have meant diversions for cyclists on to main roads. However, plans are in place to rebuild at least some of these. This bridge, between St Martin and Varages, means cyclists must use the main road.

Much of the route can be difficult in wet conditions. But when dry, there are some good direct and flat tracks. 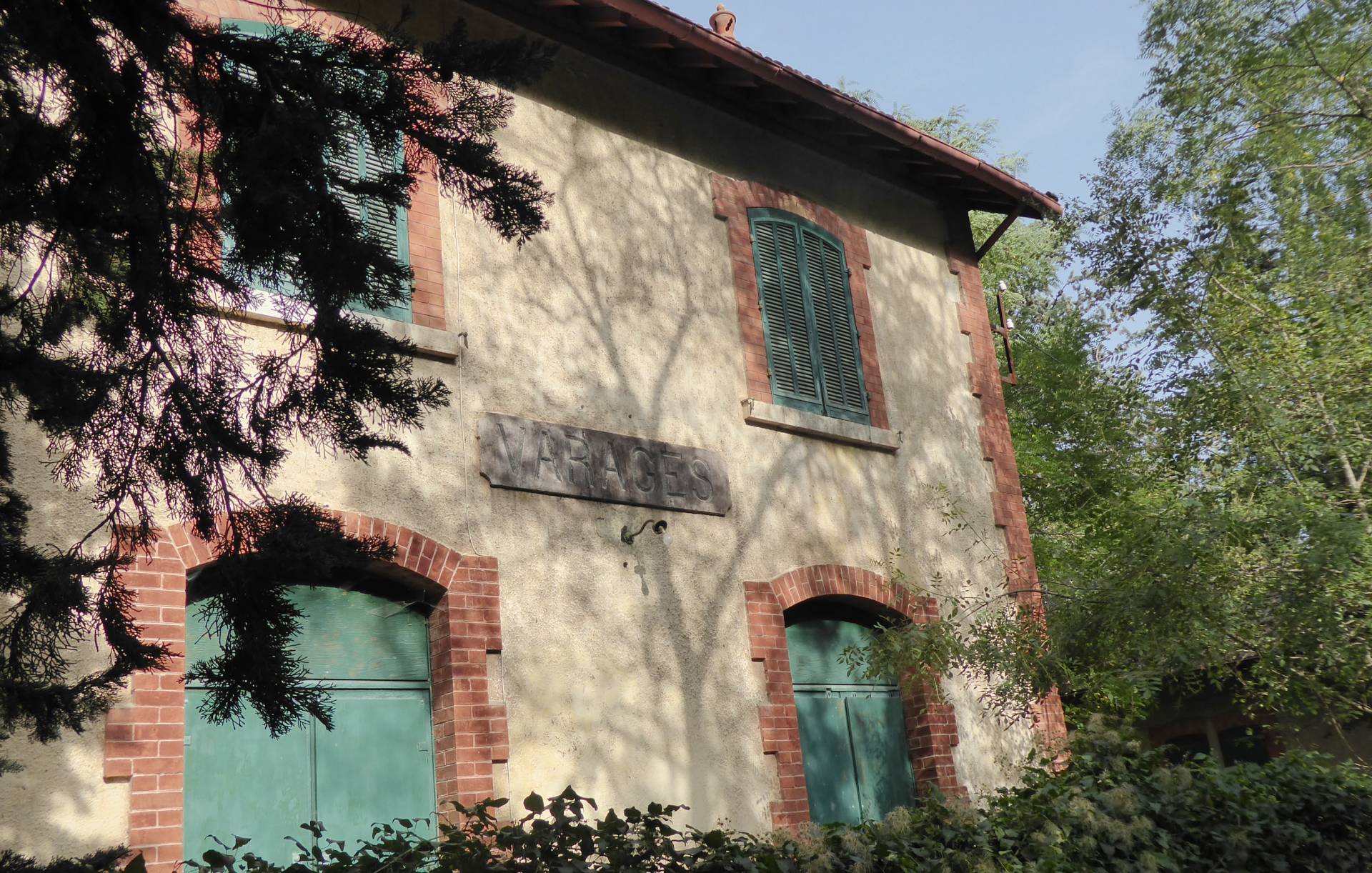 Though not yet cleared, the track alongside the old station is passable. Riding from Rians to Barjols, you can avoid the steep climb into Varages and out again by using this route. 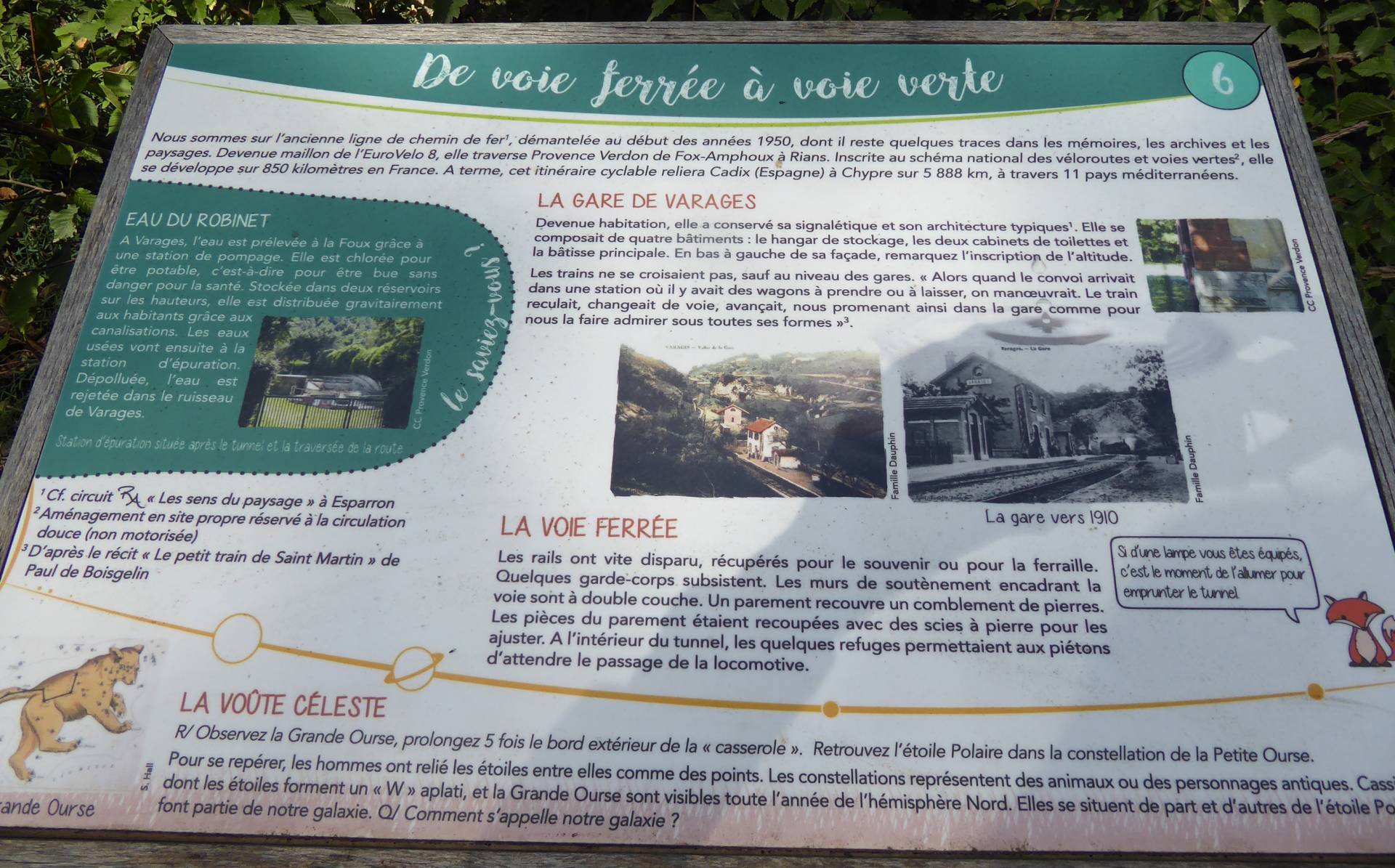 Information along the route

An information panel at Varages station.