The story of the development of the EV8 in la Provence verte is one of little or no funding from national and European funders. Despite this, local and regional authorities are doing their best to get the work done. But the long timescale means large sections of the route will remain provisional for some time to come. 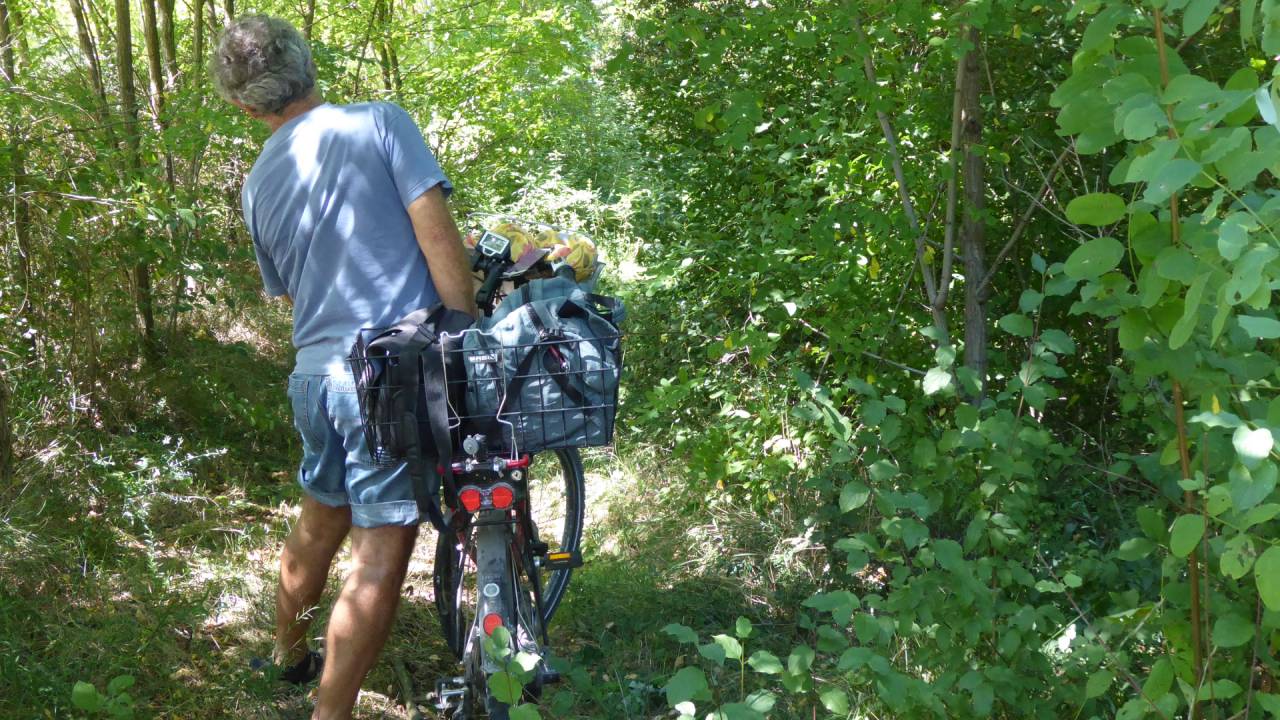 The old railway line needs clearing in many places. This is west of Varages.

Work started on the cycleway in 2007, when a first blueprint was produced by the project steering committee. We also met a surveyor assessing the route in the same year. But little was achieved in these first years. In 2011 and 2012, the European Cycling Federation argued for the inclusion of the EuroVelo project in the EU’s trans-European transport network TEN-T. This would be the EU’s principle funding package for the coming decade. But cycling was rejected as an important means of transport. Local authorities were left high and dry to fund the work themselves.

The project’s steering committee, representing départments in the PACA region, met in Marseille in June 2015 to assess the situation. It was noted that, at the current pace, it would take between 50 and 80 years to complete the project. This injected a certain amount of urgency into the work, and the region agreed to allocate a small amount of funding towards creating at least a provisional, connected, and signed EuroVelo 8 in the region. This was the jalonnement initiative.

Within a few years, signs were being erected along the route to direct cyclists. However most of these were on existing roads. The vision behind the project was to slowly replace these with dedicated cycleways, largely separated from motor traffic

But the pace of building is still slow. Without substantial funding, work is being done piecemeal, as and when local authorities can spare the manpower and machinery.  Probably the easiest sections, between Salernes and Flayosc, were opened in 2017. Now work has begun on sections between Salernes and Rians. This generally involves 4 phases:

A lack of dedicated funding means that these phases are taking years to complete. Yet as progress is slowly made, many sections offer alternative options to the signed route. Since local authorities are obliged to adhere to all the various legal requirements, this can mean that perfectly good cycle routes are not made “official” until the very last sign has been erected.

Take, for example, the route from Varages to Barjols. Here, a signed jalonnement is in place. This uses the main road between the villages for much of the way, with a short detour along a back lane. The route adds over two kilometres to the journey, and involves more gradients than the railway route. Moreover, it is mostly on the D554, which is quite narrow, has a lot of small curves and can get busy at certain times of the day. You can view the route below.

Then in 2021, work began on the cycleway proper. The route of the old railway line was already clear. But it was full of potholes and large stones. It had been used by a few local residents and hunters, but little else. Thus the first works involved levelling and laying a gravel surface. This has made it eminently useable. For this reason it is our recommended route for this section. It is due to be officially opened in 2022 or 2023, when it will replace the existing signed route. The surface is now already finished, with the exception of the Barjols tunnel. Some signs have appeared at the Barjols end prohibiting motor traffic, though as yet there is no modal filter.

Progress is slow but is now visible. There is now talk of re-building some of the broken bridges. Every few months we come across clearance or resurfacing work. Once completed, the EV8 in our region will be a great cycleway for both local people and visitors.

FR
We use cookies on our website to give you the most relevant experience by remembering your preferences and repeat visits. By clicking “Accept All”, you consent to the use of ALL the cookies. However, you may visit "Cookie Settings" to provide a controlled consent.
Cookie SettingsAccept All
Manage consent