The 14 km long Vigne á Vélo is a great connecting cycleway running south of the EV8 at Draguignan. Until you reach the outskirts of Les Arcs, it is almost completely free of motor traffic. It is a signed route. However, we missed badly-placed signage a few times, and they peter out in Les Arcs.

As we began riding on the Vigne à Vélo, we were pleasantly surprised to see how well used it is. Cyclists, wheelers, walkers were all enjoying the early spring sun along the way, particularly in and around Draguignan, the central town for the La Dracenie region.

Especially near Draguignan, we enjoyed a wonderful surface, seating areas, bins and taps with drinking water. On the negative side we later got lost three times, because signs were either missing, in the wrong place or hidden by cars parking in front of them.

The Vigne à Vélo does not – strictly speaking – belong to the EV8. However, it connects cyclists using the EV8 to the train station of Les Arcs-sur-Argens, where there are regular regional trains (TER) as well as the TGV. The first stretch of„La Vigne à Vélo“ was opened in April 2016 and was supposed to connect the centre of Les Arcs with the hinterland (the vineyard Sainte Roseline). A second stretch covered Draguignan and its outskirts to the east down to Trans-en-Provence. Eventually the gap between these stretches was closed. Most of this cycle route is car free, just 4 kilometres are shared with cars.

From Draguignan centre to Trans-en-Provence (5 km)

The Vigne à Vélo starts right in the heart of Draguignan. The Tourism Office (with a service station for your bicycle), the former train station of Draguignan (now the bus station), and the old town centre are all just a few hundred metres from the cycleway. If you come with a car, there is a car park right at the beginning of the cycle path. There is also a large information panel. This gives details of what to see along the route. Interestingly, it also explains how cyclists and pedestrians should behave as they are sharing the path. For example, it asks pedestrian groups not to walk over the full width of the path and cyclists to give pedestrians space.

All the way down to Trans-en-Provence the veloroute is very smooth. New bridges have been put in place, and it offers a number of picnic places, bins and drinking water. In Trans-en-Provence the path passes a bicycle repair shop (Decathlon). A pleasant detour at Trans is the Puits Aerien or air well. This unique structure stands a few hundred metres off the cycleway. After Decathlon, the cycleway takes a sharp left turn down to the side of the main road. Instead of turning left, turn right. Two hundred metres up this path, turn right and cycle uphill. The air well is on your left.

From Trans-en-Provence to Les Arcs (9 km)

On this stretch we got lost three times. Right in Trans-en-Provence just after Decathlon we missed a sign, which – in our opinion – is not very well placed, a bit hidden to the left. We found the track later again.

A few kilometers further on, we missed another sign.It hangs low, on a fence right outside the entrance to a depot. When we passed, some men were unloading a van parked right in front of it. We missed the sign completely, wondering if we should have taken a different path.

Once we reached the outskirts of Les Arcs all signs end and we had to „google“ our way into the centre and later to the station.

All in all the cycle route is pleasant to ride – if you are aware of the problems explained above. In the centre of Les Arcs there are quite a few cafés and the tourist office with good bike parking in the main square outside.

On the other hand, if you start this stretch from the station of Les Arcs there are no signs to show you the way to the Vigne à Vélo cycleway. Your best bet is to turn right when you come out of the station and cycle up the road to a roundabout. Cross the main road to a small turning on the other side. There you will find a sign that leads you onto the cycle path. 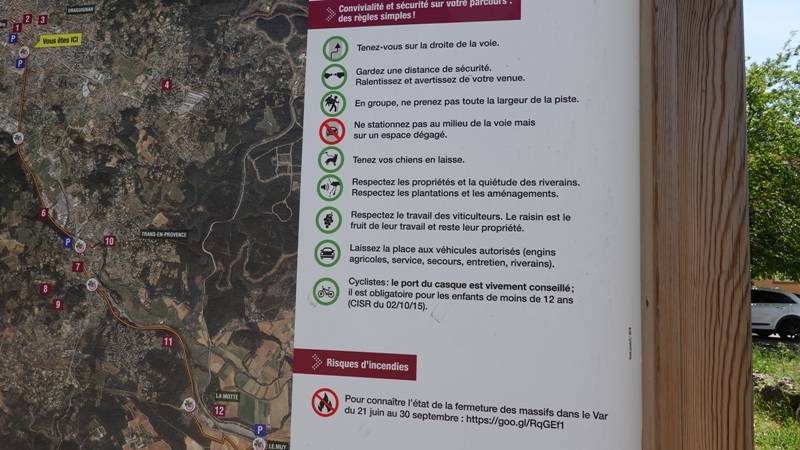 Rules for pedestrians and cyclists in Draguignan La Vigne Vert 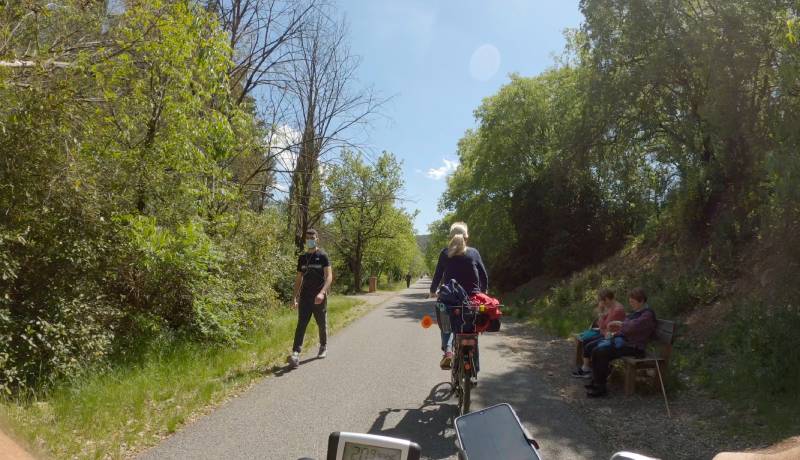 Not just for cyclists

Pedestrians and cyclists together 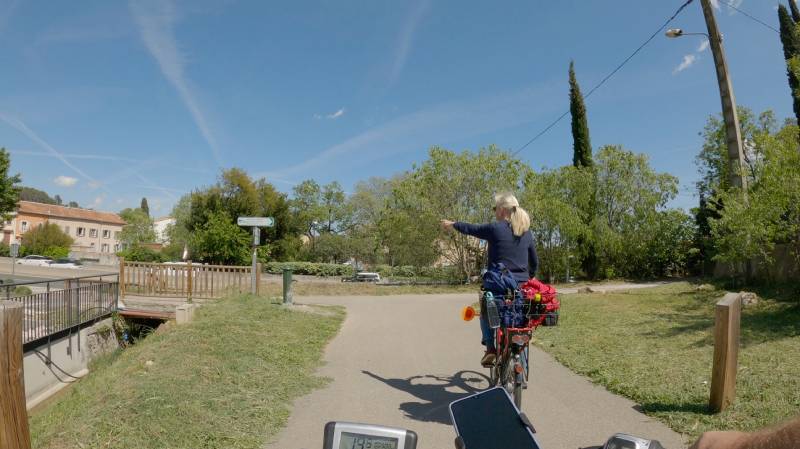 We missed the sign here in Trans-en-Provence and found ourselves lost. 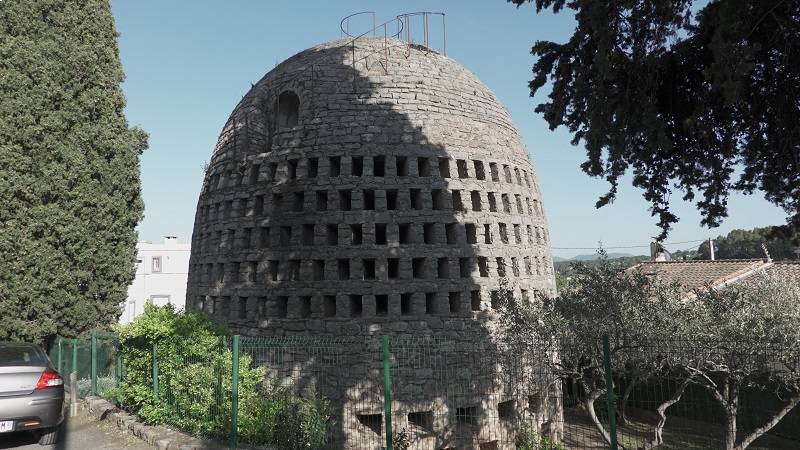 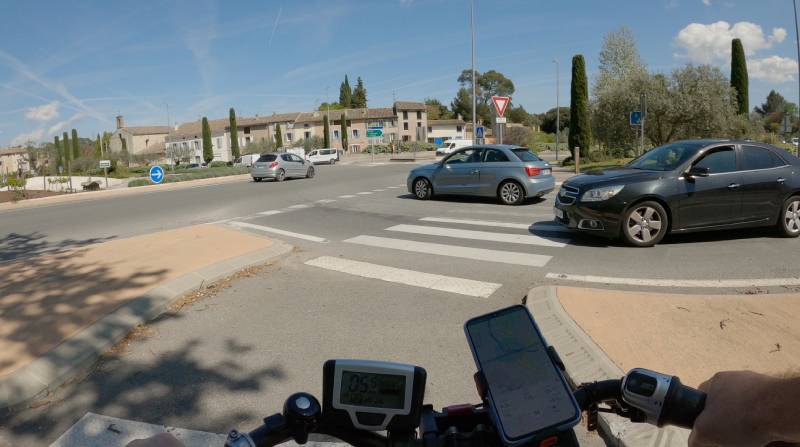 The cycleway takes you alongside the busy D1555 dual carriageway. Here you need to cross a roundabout. 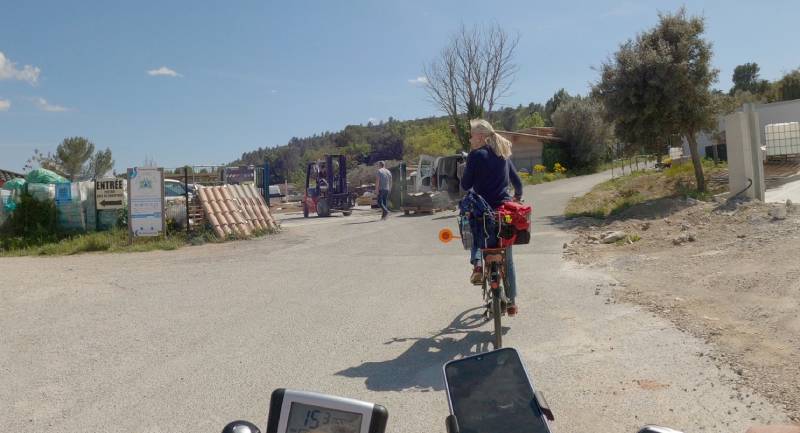 The sign here is hidden by the van being unloaded. 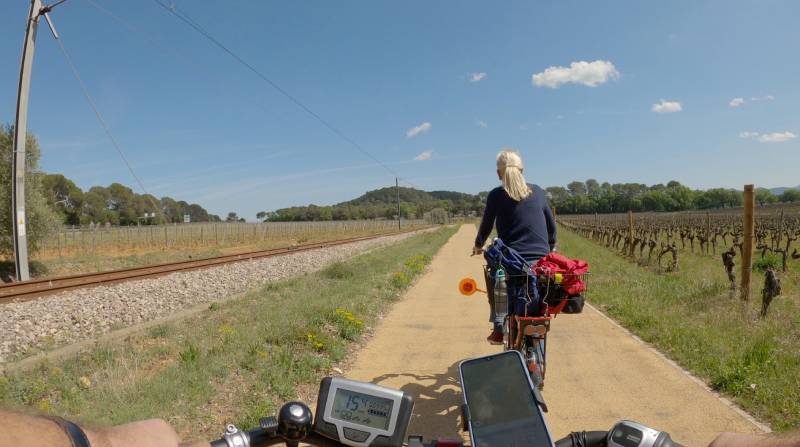 Alongside the railway line

After Trans-en-Provence we join an existing railway line heading towards Les Arcs. 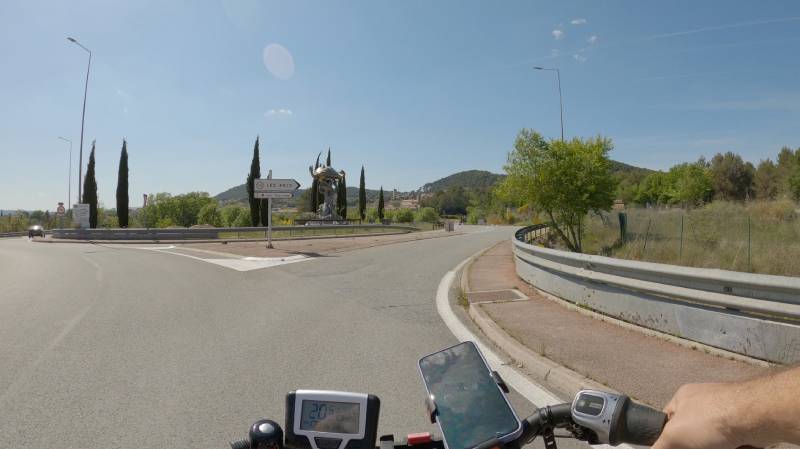 We arrive outside les Arcs at this roundabout, but signage is missing. 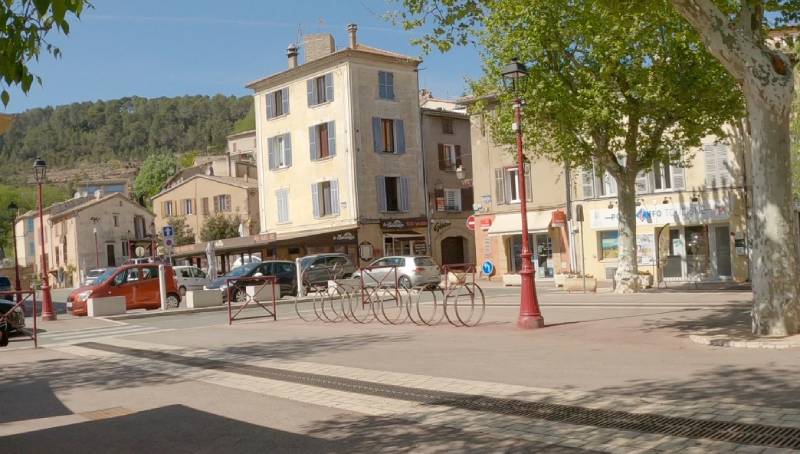 There is good cycle parking in the main square, outside the tourist office. 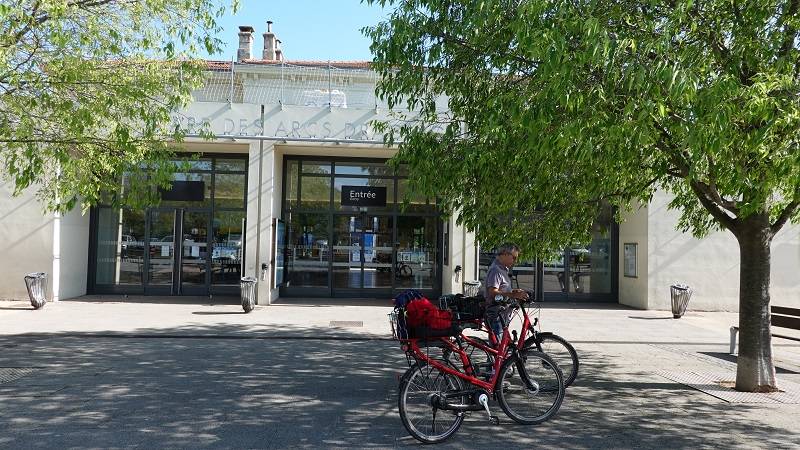 The railway station at Les Arcs

The station can be reached directly by taking the 3rd exit at the roundabout outside Les Arcs.